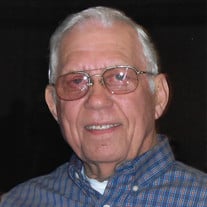 Allen L. Tate, 83, of Centralia, passed away at 8:55 a.m., Friday, January 13, 2017, in Centralia. He was born in Mt. Vernon, the son of Vasco and Opel Tate. On July 9, 1959, at Zion United Methodist Church, he married Carolyn Moore, and she survives in Centralia. He attended Zion Grade School and Mt. Vernon Township High School, before serving in the United States Army. He was a licensed plumber for many years. He attended Zion United Methodist Church. Mr. Tate was a member of Plumber and Pipefitters Local 653, and the Quarter Horse Association. He enjoyed raising horses, and collecting toy tractors. In addition to his wife, Carolyn Tate of Centralia, he is survived by one daughter, LeAnn Smith and husband Jeff of Bethalto, Illinois; one granddaughter, Tate Smith of Bethalto; two sisters, Naomi Tate Oliver of Mt. Vernon, and Doris Leuty of Mt. Vernon; a mother-in-law, Pauline Moore of Centralia; and several nieces and nephews. He was preceded in death by his parents; one sister, Shirley Tate; and one brother, Robert Tate. Private funeral services for the family of Mr. Tate will be held, and no public services or visitation will be accorded. All memorial gifts and sympathy cards may be sent to the Osborn Funeral Home, which is entrusted with arrangements. Online condolences may be made at www.osbornfuneral.com, or on the funeral home's Facebook page.

The family of Allen L. Tate created this Life Tributes page to make it easy to share your memories.

Send flowers to the Tate family.