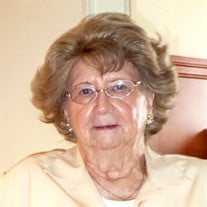 Arzilla Lillian Weiner passed from this world on September 26, 2016, in Denton Texas, and is at peace with the Lord. She was born in Nokomis, Illinois, on June 18, 1923, the daughter of John and Nellie (Roper) Fritts. Arzilla attended business school and worked as a secretary for Hines VA Hospital in Chicago for most of her career, until her retirement. She met David Weiner after her retirement, and they married and moved to Denton, Texas, to be close to her sister, Iola, and family. She was a member of Southmont Baptist Church and was a supportive participant for many years. She enjoyed life, taking drives out into the county, and seeing the animals. She also loved going out to eat with friends and family. She is survived by one nephew, John William Weston of Denton, Texas; one niece, Louise Weston-Ferrill and husband Warren of Denton, Texas; cousin, Helen Tate and children Greg, Carla, and their children; cousin Jackie Fritts and his wife and children. Arzilla had wonderful friends, Julie, Peggy, Doris, Lora, and many others who loved her and loved spending time with her. She also had a loving and special relationship with David's children and grandchildren, who also survive her. She is preceded in death by her parents, John and Nellie Fritts; her beloved sister, Iola; and her husband, David Weiner. A Graveside Funeral Service will be held at 11:00 a.m. Thursday, September 29, 2016, at Pleasant Hill Cemetery, with Rev. Jack Lucas officiating. Visitation will be held from 10:00 a.m. to 10:30 a.m., on Thursday, at Osborn Funeral Home in Dix. Memorials may be made to an organization of the donor's choice and will be accepted at the service, or by mail to the Osborn Funeral Home, P.O. Box 130, Dix, Illinois 62830. Online condolences may be made at www.osbornfuneral.com, or on the funeral home's Facebook page.

Arzilla Lillian Weiner passed from this world on September 26, 2016, in Denton Texas, and is at peace with the Lord. She was born in Nokomis, Illinois, on June 18, 1923, the daughter of John and Nellie (Roper) Fritts. Arzilla attended... View Obituary & Service Information

The family of Arzilla Lillian Weiner created this Life Tributes page to make it easy to share your memories.

Arzilla Lillian Weiner passed from this world on September 26,...

Send flowers to the Weiner family.