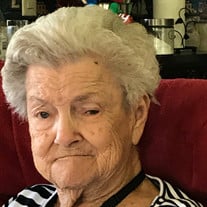 Betty Jean Russell Williams, 89, of Woodlawn, passed away at 5:40 p.m. Friday, December 13, 2019, at Countryside Manor in Mt. Vernon. She was born in Centralia, on Oct. 21, 1930, to Roy Nelson and Edith Rueark Nelson. On April 5, 1947, in Centralia, she married Raymond L. Russell, and he preceded her in death on Jan. 15, 1975. On Nov. 11, 1997, in Woodlawn, she married Wayman Williams, and he also preceded her. Betty was a homemaker and worked at Murray Center in Centralia. She attended Four Corners Grade School and Woodlawn Community High School, and was a member of Mt. Catherine Christian Church. Betty is Survived by a son, Monty James Russell of Woodlawn; two daughters, Linda Diane Phelps and Tina Beth Shafer and husband Bob all of Mt. Vernon; seven grandchildren; and five great grandchildren. In addition to her husbands, she was also preceded by her parents; one son, Roy Russell; two infant brothers; and two sisters, Lenora Davidson and Norma Fatgetter. Funeral services will be Thursday, Dec. 19, 2019, at 11 a.m., at The Osborn Funeral Home in Dix, with Jonathan Schnautz officiating. Burial will follow at Mt. Catherine Cemetery. Friends may call from 5 to 7 p.m. on Wednesday, at the funeral home. Memorial gifts may be made to the Mt. Catherine Cemetery and will be received at the service or mailed to The Osborn Funeral Home, P.O. Box 130, Dix, IL 62830. Online condolences may be made at www.osbornfuneral.com or on the funeral home's Facebook page.

The family of Betty Jean Russell Williams created this Life Tributes page to make it easy to share your memories.

Betty Jean Russell Williams, 89, of Woodlawn, passed away at...