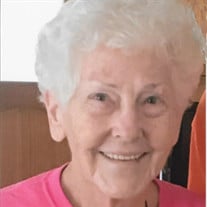 Beverly (Burns) Johnson, 78, passed away at 12:37 p.m. Thursday, March 15, 2018, at Salem Township Hospital. Beverly was born to Wayne and Lucy Burns on December 7, 1939, in Dix, Illinois. She was married to William Johnson on May 2, 1958. He preceded her in death in June 2010. She was a member of Fouts Christian Church. She is survived by three sons, James Johnson and wife Cindy of Paris, Tennessee, Steve Johnson and wife Jill of Woodlawn, and David Johnson and wife Cheri of Breese; five grandchildren, Jami Day and husband Danny of Mt. Vernon, Jadi McBride and husband Farley of Paris, Tennessee, Michael Johnson of Woodlawn, and Rylie and Parker Johnson of Breese; two great-grandchildren, Burkleigh and Grady; two step-great-grandchildren, Weston and Abby McBride; two brothers, Jerry Burns and wife Mary of Centralia, and Bill Burns and wife Arline of Clinton, Arkansas; one sister, Helen Blount and husband Levelle of Satsuma, Alabama; and several nieces and nephews. She was preceded in death by her husband; her parents and grandparents; two sisters-in-law, Shirley Elliston and Genevieve Fanning; three brothers-in-law, Sonnie Knox, Lloyd Johnson, and Abe Elliston; and two nephews, Roy Levelle Blount, Jr., and Dennis Calvin. Funeral Services for Mrs. Johnson will be held at 1:00 p.m. Sunday, March 18, 2018, at the Osborn Funeral Home in Dix, with Jerry Wilson officiating. Burial will follow at Mt. Vernon Memorial Gardens. Visitation will be held Sunday, from 11:00 a.m. until the hour of the service, at the funeral home. Memorial gifts may be made to the National Multiple Sclerosis Society, and will be accepted at the service, or by mail to the Osborn Funeral Home, P.O. Box 130, Dix, Illinois 62830. Online condolences may be made at www.osbornfuneral.com, or on the funeral home's Facebook page.

The family of Beverly (Burns) Johnson created this Life Tributes page to make it easy to share your memories.

Send flowers to the Johnson family.