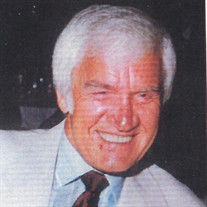 Billy (Bill) Ellis, 85, of Dix, passed away at his home, on November 9, 2015, after a brief bout with cancer. Bill was born at his family home in Mt. Vernon on March 15, 1930, the son of Rufus and Bessie (Rister) Ellis. In August 1947, a mutual friend introduced Bill to Helen Riley of Dix. They were married in February of 1949, and she survives in Dix. He attended Franklin Grade School, Casey Junior High School, and Mt. Vernon Township High School, graduating in 1948. While in grade school, he delivered newspapers, both in the morning and evening. On weekends, he worked in his parents' grocery store in Mt. Vernon. While in High School, Bill worked for Montgomery Ward and belonged to the Illinois National Guard. During the Korean Conflict, He enlisted in the United States Navy, serving from 1951 to 1955. He worked at Chromalloy Radiator Company from 1966 to 1980, and Nutherm from 1981 until his retirement in 1995. Bill enjoyed being with his family, taking care of his home and yard, and many remodeling and woodworking projects. He was of the Methodist Denomination. In addition to his wife, Helen, he is survived by one son, Tom Ellis of Texico; two grandsons, Ryan Fatheree and wife Kara of Dix and Aaron Brink of Richview; one brother, Guy Ellis and wife Jodie of Decatur; three sisters, Betty Hartsell and husband Huey of Cullman, Alabama, Marilyn Martin and husband Don of Edmond, Oklahoma, and Carolyn Davis and husband Wayne of Decatur; and many nieces and nephews. Bill was preceded in death by his parents; one daughter, Deborah Brink; two brothers, Wilbern and wife Evelyn and Dan and wife Rosie; and one sister, Pauline. As per his request, cremation rites have been accorded. No visitation or funeral service will be held, and private burial services will be held at a later date. Because Bill was so happy to find his dog Daisy in an animal shelter, the family requests that any memorials be made to a local animal shelter or another organization of the donor's choosing.

The family of Billy "Bill" Ellis created this Life Tributes page to make it easy to share your memories.

Send flowers to the Ellis family.