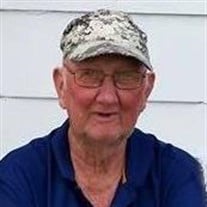 Bobby Clarence Stuber, 82, of Iuka, died at 9:40 a.m. on Sunday, May 7, 2017, at his home. He was born April 12, 1935, in Iuka, the son of Clarence Ellis and RenaBelle (Geibe) Stuber. He was a veteran on the United States Army. He worked at Illinois Central IC Shops for many years, Whipps Honda as a mechanic, and Salem Modular Homes, and was a carpenter and painter for most of his life. He was a manager for the Bluegrass band, "The Downstate Ramblers." After retirement, he spent many hours in his nieces cafe, making chili and homemade pies. Mr. Stuber is survived by brothers Wayne Stuber and Tony Stuber of Iuka; Nieces Gay Walker and Penny Helm and husband Kenny, both of Iuka; Nephew Jeff Stuber of Iuka; Great-niece, Chandra Hunter and husband Roger of Iuka; Great-nephews Jeromy Prosise and fiancee Rachelle of Benton, Kentucky, Jarid Walker of Salem, Shane Prosise of St. Louis, Missouri, and Brandon Stuber of Iuka; and Great-great-nephews Garrett Hunter of Iuka, and Jacob Prosise of Benton, Kentucky. He was preceded in death by his parents and one sister-in-law, Kathy Stuber. Graveside funeral services for Mr. Stuber will be held at 10:00 a.m., on Thursday, May 11, 2017, at Bell Cemetery, with Graveside Military Rites accorded by American Legion Post #141, of Mt. Vernon. Visitation will be held Wednesday, May 10, 2017, from 5:00 p.m. until 7:00 p.m., at Osborn Funeral Home in Dix. Online condolences may be made at www.osbornfuneral.com, or on the funeral home's Facebook page.

The family of Bob Stuber created this Life Tributes page to make it easy to share your memories.