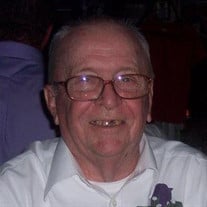 Chancey Wheeler "Buck" Thorpe, 81, of Kell, passed away at 4: 55 p.m. December 17, 2016, at his home. He was born in Vernon, Illinois, on March 23, 1935, the son of Daniel and Nellie (O'Neal) Thorpe. On December 21, 1962, in Centralia, Illinois, he married Betty Campbell, and she preceded him in death on August 18, 2011. He graduated from Patoka High School, and served in the United States Army, stationed in Germany. He retired after working for Continental Tire in Mt. Vernon, and Lear Sieglar, in Centralia. He was of the Methodist faith, and was a member of the American Legion, and a Life Member of Amvets. He was an avid St. Louis Cardinals Fan. He is survived by one daughter, Connie Kohut and husband Joe of Mt. Vernon; twelve grandchildren, Tracy Shuetz and husband Brian, Clifford Morton and wife Monica, Tamera Price and significant other Jim Andros, Marla Vasquez, John H. Morton and wife Marla, Troy Morton and significant other Tristan Lemme, Joe Thorpe and wife Jessica, Curtis Thorpe, John A. Morton, Christopher Morton, Elizabeth Cross, and Terry Burner; fourteen great grandchildren; and one great-great grandchild, with another expected; one sister, Patsy Williams of Mt. Auburn, Illinois; one son-in-law, Jack Morton; and several nieces and nephews. He was preceded in death by his parents; his wife, Betty Thorpe; one son, Steve Gwin; one daughter, Donna Morton; one son-in-law, John H. Morton; five brothers, Harry, Fred, John, Bob, and Edwin Thorpe; one grandson; and one great granddaughter. In accordance with his wishes, cremation rites have been accorded, and a memorial service will be held at Osborn Funeral Home in Dix on Tuesday, December 27, 2016, at 7:00 p.m.. Visitation will be held for one hour prior to the service. Memorial gifts may be made to an organization of the donor's choice, and will be accepted at the service, or by mail to the Osborn Funeral Home, P.O. Box 130, Dix, Illinois 62830. Online condolences may be made at www.osbornfuneral.com, or on the funeral home's Facebook page.

The family of Buck Thorpe created this Life Tributes page to make it easy to share your memories.

Send flowers to the Thorpe family.