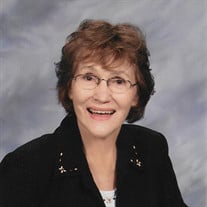 Catherine Jo (Green) Watts, 79, of Mt. Vernon, passed away at 8:35 a.m. Tuesday, August 8, 2017, at Altamont Lutheran Care Center, in Altamont. She was born April 1, 1938, in Princeville, Illinois, the daughter of Denver and Elda (Taylor) Green. She graduated from Manual High School in Peoria, Illinois, and was a member of Donoho Prairie Christian Church in Texico. She is survived by one son, James Watts and wife Jody of Altamont; two daughters, Anita Gajewski and husband Ted of Fairview Heights, and Andrea Mason and husband Richard of Woodlawn; eight grandchildren, Casie Bowman and husband Derek of Illinois, Corie Cowsert and husband Chris of Indiana, Maria Jordan and husband Ben of California, and Micah Gajewski and wife Estephanie of Illinois, and Hope Catherine Mason, Faith Mason, Treylon Mason, and Joy Mason of Illinois; five great grandchildren, Emma and Eli Bowman, Easton Cowsert, and Atticus and Violet Jordan; one brother, Denver Green; and one sister, Alma Swain. She was preceded in death by her parents; one sister, Betty Lou Claver; one brother-in-law, Jim Swain; and one sister-in-law, Sharon Green. Funeral Services for Ms. Watts will be held at 10:00 a.m. Saturday, August 12, 2017, at Donoho Prairie Christian Church, in Texico, with Jim Watts officiating. Burial will follow at Donoho Prairie Cemetery. Visitation will be held Friday, August 11, 2017, from 5:00 p.m. to 8:00 p.m., at the Osborn Funeral Home in Dix. Memorials may be made to the Donoho Prairie Cemetery, or the Legacy Christian Academy in Caseyville, and will be accepted at the service, or by mail to the Osborn Funeral Home, P.O. Box 130, Dix, Illinois 62830. Online condolences may be made at www.osbornfuneral.com, or on the funeral home's Facebook page.

The family of Catherine Jo Watts created this Life Tributes page to make it easy to share your memories.

Send flowers to the Watts family.