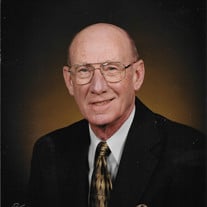 Charles D. Crane, 83, of Herrin, passed away at 11:55 p.m. on Friday Dec. 22, 2017, at SIH Memorial Hospital in Carbondale, with his family by his side. He was born in Centralia on Dec. 9, 1934 the son of Virgil and Ferne (Copple) Crane. On March 26, 1954, at Boyd Christian Church, he married his childhood sweetheart, Jean Wittenbrink, and she survives him in Herrin. Mr. Crane graduated from Woodlawn High School, and Centralia Junior College, and he then graduated from Southern Illinois University at Carbondale, School of Education. He taught school for 35 years at Woodlawn Grade School where he also served as coach and Assistant Principal. He was a member of the Retired Teachers Association and Illinois Education Association. During his time at Woodlawn High School and Centralia Junior College, he played basketball, which led to a long coaching career. Charles enjoyed golfing, and hunting, and was a St. Louis Cardinals fan and sports enthusiast, but most of all, he enjoyed being with his family. Mr. Crane is survived by his wife Jean Crane of Herrin; a daughter Marcia Furby and husband Jerry of Clarksville, TN; a son, Steve Crane and wife Julie of Carterville; five grandchildren and five great grandchildren, Megan Rietman and husband Joseph and their children Lillie, Charlie Grace and Kallie, all of San Diego, Ca., Jerrod Furby of Chicago, Joshua Crane and wife Ali of Mattoon, Jenna Dusch and husband Jeff and their children Blythe and Nolan Dean, all of Denham Springs, LA, and Jacob Crane of Carterville. He was preceded in death by his parents; and grandparents, Mr. and Mrs. Spencer and Eva Crane. Funeral services for Mr. Crane will be Thursday, Dec. 28, 2017, at 10 a.m. at the Osborn Funeral Home in Dix, with J. Howard Krapps officiating. Burial will follow at the Boyd Cemetery. Visitation will be from 5:00 p.m. to 7:00 p.m. on Wednesday, at the funeral home. In lieu of flowers, memorial gifts may be made to Boyd Christian Church and will be received at the service, or by mail to the Osborn Funeral Home, P.O. Box 130, Dix, IL, 62830. On line condolences may be made at www.osbornfuneral.com, or on the funeral home's Facebook page.

The family of Charles D. Crane created this Life Tributes page to make it easy to share your memories.

Send flowers to the Crane family.