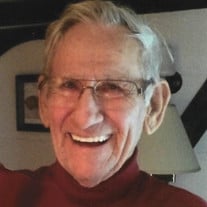 Charles C. Hester, 86, of Iuka, passed away Sunday, December 29, 2019, at his home, following a long and courageous battle with cancer. He was born February 9, 1933, in Christopher, Illinois, the son of John and Augustine (Lang) Hester. On June 15, 1962, at Wiley Barracks Military Chapel in Neu-Ulm, West Germany, he married Helga Frank, and she survives in Iuka. Mr. Hester was in the United States Army from 1953-1973, serving in the Korean Conflict and the Vietnam War, as a truck driver, a helicopter crew chief, and as a military policeman. He was a member of the Veterans of Foreign Wars, and the American Legion. He enjoyed hunting, fishing, playing cards, traveling in his RV. After retiring from the U.S. Army, he returned to Illinois, and worked for World Color Press, in Salem, until his retirement. In addition to his wife Helga Hester of Iuka, he is survived by one son, Thomas Hester and wife Cheryl of Dix; one son-in-law, Bob Ratts of Iuka; three grandchildren, Justin Ratts and wife Amie of Alma, Jasmine Ratts of Iuka, and Brandy Karcher and husband Kurt of Dix; eight great-grandchildren, Kaleb Ratts, Kalin Bass, and Zoey Ratts, all of Alma, Ella and Kaitlyn Karcher of Dix, Dalton and Miranda Hester of Ewing, Missouri, and Randy Hester, Jr., of Pinckneyville; five brothers, Richard Hester of Salem, Loren Hester and wife Della of Harrisburg, Frank Hester and wife Pamela of DuQuoin, Chuck Hester of Ava, and Bob Warren and wife Betty of Zeigler; four sisters, Bessie Russell of Salem, Rosetta Jones of Phoenix, Alabama, Dorothy Hinton of DuQuoin, and Jean Loucks of Cadet, Missouri; and many nieces, nephews, and cousins. He was preceded in death by his parents; one daughter, Caroline Ratts; two sons, Gene and Randy Hester; two brothers, Jimmy and John Hester; one sister, Audrey Brown; and two brothers-in-law, Floyd Brown and Jerry Russell. Funeral services for Mr. Hester will be held at 11:00 a.m., on Friday, January 3, 2020, at the Osborn Funeral Home in Dix. Burial will follow at Iuka Cemetery. Graveside Military Rites will be accorded by American Legion Post #141, of Mt. Vernon, Illinois. Visitation will be held from 5:00 p.m. to 7:00 p.m., Thursday, January 2, 2020, at the funeral home. Memorial gifts may be made to the Iuka Cemetery or the American Cancer Society, and will be accepted at the service, or by mail to the Osborn Funeral Home, P.O. Box 130, Dix, Illinois 62830. Online condolences may be made at www.osbornfuneral.com, or on the funeral home's Facebook page.

Charles C. Hester, 86, of Iuka, passed away Sunday, December 29, 2019, at his home, following a long and courageous battle with cancer. He was born February 9, 1933, in Christopher, Illinois, the son of John and Augustine (Lang) Hester. On... View Obituary & Service Information

The family of Charles C. Hester created this Life Tributes page to make it easy to share your memories.

Send flowers to the Hester family.