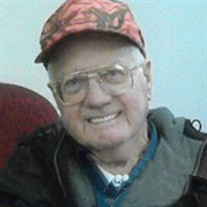 Clyde David Upton, Jr., 87, of Kell, passed away on Thursday, March 29, 2018, at Mt. Vernon Health Care center. He was born in Mt. Vernon, on Dec. 22, 1930, to Clyde David and Myrtle (Tate) Upton. on Nov. 3, 1952, in Mt. Vernon, he married Juanita Louise Tennyson, and she preceded him in death on Mar. 13, 2018. Mr. Upton graduated from Mt. Vernon Township High School in 1949. He attended the rank of Staff Sergeant in the United States Air Force. Clyde was a heavy machinery operator and a member of the International Union of Operating Engineers local #520 from 1956 to 2004. Mr. Upton was also a member of American Legion Post #141 of Mt. Vernon, Mt. Vernon Masonic Lodge #31 AF & AM for 25 years, The Mt. Vernon Sportsman's Club, and the National Rifle Association. Mr. Upton is survived by a son, David Upton and wife Lynn of Mt. Vernon; a daughter-in-law, Rebecca Becker of Salem; three granddaughters, Heather Pace and husband Jason of Mt. Vernon, Trina Green and husband Jason of Salem, and Ambria Susmena and boyfriend Stacey May of Salem; one grandson, Kyle Upton and wife Brittany of Boyd; and eleven great-grandchildren, Katelyn, Jillian, Jackson and Koleson Green of Salem, Maya, Aden, and Maci Susmena of Salem, Brody and Josie Pace of Mt. Vernon, and Dawson and Kendall Upton of Boyd. In addition to his wife, Juanita Upton, he was preceded in death by his parents; one son, DeWayne Lee Upton; two brothers, Marvin Upton and Clayton Eugene Upton; and two sisters, Dorothy Rollinson and Ina Bell Rollinson McFall. Funeral services will be held Tuesday, April 3, 2018 at 12 noon at the Osborn Funeral Home in Dix with Jesse Hinds officiating. Burial will follow at Union Chapel Cemetery. Graveside Military Rites will be accorded by American Legion Post #141 of Mt. Vernon. The family will receive friends on Tuesday from 10 am till the time of the funeral. Memorials may be made to the Family of Mr. Upton and will be received at the service or mailed to the Osborn Funeral Home, P.O. Box 130, Dix, IL 62830. Online condolences may be made at www.osbornfuneral.com, or on the funeral home's Facebook page.

The family of Clyde David Upton Jr. created this Life Tributes page to make it easy to share your memories.

Send flowers to the Upton family.