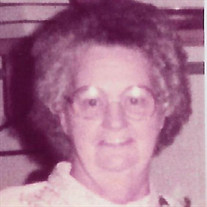 Clythera L. Howard, 98, of Centralia, passed away at 4:05 a.m., Monday, February 4, 2019, at Odin Healthcare Center in Odin. She was born October 5, 1920, in Hillsboro, Illinois, the daughter of William and Mary (Corrie) Winkler. On October 19, 1936, in Salem, Illinois, she married Earl Howard, and he preceded her in death on January 28, 1984. She loved to crochet, and worked at Miss Elaine's as a Seamstress. She also worked at several restaurants, and was a caregiver for the elderly. Mrs. Howard is survived by two sons, Clarence Howard of Arkansas, and Raymond Howard of Centralia; five daughters, Louella Howard of Centralia, Patsy Masters of Centralia, Susan A. Whitledge of Centralia, Beryl Ann Snyder of Centralia, and Judy Howard-Chappell and husband Gene; and many grandchildren and great grandchildren. In addition to her husband, she was preceded in death by her parents; one son, Earl "Bimbo" Howard, Jr.; and three daughters, Alice Faye Howard, Emma Jane Bromley, and Janice K. Howard. Funeral services for Mrs. Howard will be held at 1:00 p.m. Friday, February 8, 2019, at the Osborn Funeral Home in Dix. Interment will follow at Antioch Cemetery. Visitation will be held from 12:00 p.m. (Noon) until the hour of service on Friday, at the funeral home. Memorials may be made to the Antioch Cemetery will be received at the service, or by mail to the Osborn Funeral Home, P.O. Box 130, Dix, Illinois 62830. Online condolences may be made at www.osbornfuneral.com, or on the funeral home's Facebook page.

Clythera L. Howard, 98, of Centralia, passed away at 4:05 a.m., Monday, February 4, 2019, at Odin Healthcare Center in Odin. She was born October 5, 1920, in Hillsboro, Illinois, the daughter of William and Mary (Corrie) Winkler. On October... View Obituary & Service Information

The family of Clythera L. Howard created this Life Tributes page to make it easy to share your memories.

Send flowers to the Howard family.