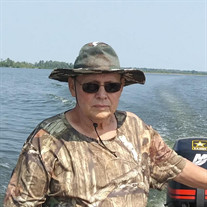 David Waldo Mendenhall, 71, of Texico, passed away on Thursday, November 11, 2021, at his home. He was born in Mt. Vernon, on May 11, 1950, the son of Owen and Allene (Cagle) Mendenhall. In 2001, he married Teresa Tate, and she survives in Texico. Mr. Mendenhall was a veteran of the U.S. Army, where he served in the Old Guard. He was stationed at the White House, under President Richard Nixon. He worked for Union Pacific Railroad, and was of the Christian faith. In addition to his wife, Teresa, he is survived by a step-son, Jason Kelly; a step-daughter, Stacy Bailey and husband Nathan; three grandchildren; 1 great-grandchild; and a sister, Linda Hayes. He was preceded in death by his parents; a son, D. Dwayne Mendenhall; a brother, Edgar Mendenhall; and a niece, Susan Beth Mendenhall. Private Graveside services will be held at Abner Cemetery, south of Nason, with graveside military honors conducted by American Legion Post #141 of Mt. Vernon. In lieu of flowers, memorial gifts may be made to the Abner Cemetery, and will be accepted by mail to the Osborn Funeral Home, P.O. Box 130, Dix, Illinois 62830. Online condolences may be made at www.osbornfuneral.com, or on the Osborn Funeral Home Facebook page.

The family of David Waldo Mendenhall created this Life Tributes page to make it easy to share your memories.

David Waldo Mendenhall, 71, of Texico, passed away on Thursday,...

Send flowers to the Mendenhall family.