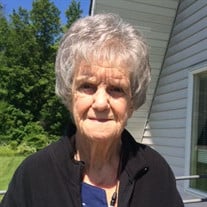 Della Marie Pierce, 87, of Bluford, went home to be with her Lord early Friday, June 9, 2017, at her home. She was born in Mt. Vernon on January 9, 1930, the daughter of Stephen and Della (House) Hayes. On August 23, 1947, in Mt. Vernon, she married Oscar Lowell Pierce, and he preceded her in death on September 14, 2001. She cleaned house for many years, and loved her grandchildren, great-grandchildren, and her newly born great-great-granddaughter, Bailee. She is survived by one son, Danny Eugene Pierce of Bluford; two grandchildren, Kerry Maier and husband Jeremy of Bluford, and Heather Pierce of Mattoon; five great-grandchildren, Cassandra Robinson and fiancée Aaron Gill of Mt. Vernon, Colton and Chase Maier of Bluford, and Heather Pierce's two children; one Great-great granddaughter, Bailee Marie Gill; four brothers, Marvin Hayes and wife Sharon of Mt. Vernon, Thomas "Jake" Hayes and friend Helen Smith of Mt. Vernon, Robbie Hayes of Mt. Vernon, and James "J.C." Hayes and wife Freeda Lee of Mt. Vernon; three sisters, Barbara Jean Graham of Mt. Vernon, Irene Madlen of Owensboro, Kentucky; and Phyllis Crowe of Florida. She was preceded in death by her parents; husband; two brothers, Walter Hayes and Stevie Hayes; and two sisters, Wanda Mitchell and Betty Brumley. Funeral Services for Mrs. Pierce will be held at 10:00 a.m., Tuesday, June 13, 2017, at Osborn Funeral Home in Dix, with Randy Hayes officiating. Burial will follow at Pleasant Hill Cemetery. Visitation will be held Monday, June 12, 2017, from 5:00 p.m. to 7:00 p.m., at the funeral home. Memorial gifts may be made to SSM Hospice, and will be accepted at the service, or by mail to the Osborn Funeral Home, P.O. Box 130, Dix, Illinois 62830. Online condolences may be made at www.osbornfuneral.com, or on the funeral home's Facebook page.

The family of Della Marie Pierce created this Life Tributes page to make it easy to share your memories.