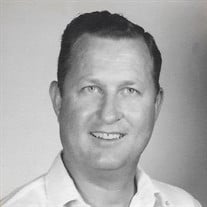 Donald Lee Roberson, 88, of Mt. Vernon, died at 1:10 p.m. Monday, October 19, 2015, at his home. He was born August 4, 1927, in Field, Illinois, the son of Jesse and Jewel (Lisenby) Roberson. On February 16, 1967, in Belle Rive, he married Barbara Ann Roberson, and she preceded him in death on August 29, 2015. He was a World War II Veteran, serving in the U.S. Army Airborne. Mr. Roberson is survived by three sons, Rickey Roberson and wife Luetta of Dix, Robert Roberson and girlfriend Charlotte Pigg of Mt. Vernon, and Christopher Roberson of Davenport, Iowa; two daughters, LaDonna Luketich and husband John of Coulterville, and Cindy Kirsch of Mt. Vernon; Twelve grandchildren; Eighteen great grandchildren; three sisters, Shirley Finn of Mt. Vernon, Betty Morton of Kell, and Nina Jones and husband Dale of Dix; and special furry friend, Max. He was preceded in death by his parents; his wife, Barbara Ann Roberson; one sister, Doris Kell and husband Glen; and two brothers-in-law, Kelly Finn and Lou Morton. Funeral services for Mr. Roberson will be held at 10:00 a.m. Friday, October 23, 2015, at Osborn Funeral Home in Dix, with Benton Fitzjerrells and Rev. Merle Fullerton officiating. Burial will follow at Zion Grove Cemetery. Graveside Military Rites will be accorded by American Legion Post #141 of Mt. Vernon. Visitation will be held from 5:00 p.m. to 7:00 p.m. Thursday, October 22, 2015, at the funeral home. Memorials may be made to the Alzheimer's Association or to the National Parkinson Foundation, and will be accepted at the service, or by mail to Osborn Funeral Home, P.O. Box 130, Dix, Illinois 62830.

The family of Donald Lee Roberson created this Life Tributes page to make it easy to share your memories.

Send flowers to the Roberson family.