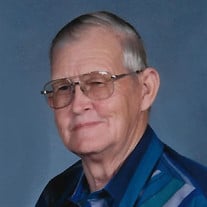 Donald J. Ward, 85, of Iuka, and formerly of Bluford, passed away at 10:25 a.m. Monday, August 21, 2017, at Salem Township Hospital in Salem. He was born June 15, 1932, in Bluford, the son of Frankie and Alice (Cooper) Ward. On July 18, 1959, he married Irene Byars, and she preceded him in death on June 21, 1993. He later married Verlene Jennings, and she survives in Salem. He was a former member of Wells Chapel General Baptist Church, and a current member of New Liberty General Baptist Church. He served in the United States Army in Korea. In addition to his wife, Verlene Ward of Salem; he is survived by two step-sons, Dwayne Jennings and wife Chris of Iuka, and Ron Jennings and wife Kathy of Iuka; two grandsons, Dylan Jennings of Iuka, and Doug Jennings and wife Renae of Iuka; and three great-grandchildren. He was preceded in death by his parents; his first wife, Irene Ward; and one grandson, Shannon Landreth. Funeral Services for Mr. Ward will be held at 11:00 a.m. Friday, August 25, 2017, at the Osborn Funeral Home in Dix. Burial will follow at Wells Chapel Cemetery. Visitation will be held Thursday, August 24, 2017, from 5:00 p.m. to 7:00 p.m., at the funeral home. Memorial gifts may be made to the Wells Chapel Cemetery, and will be accepted at the service or by mail to the Osborn Funeral Home, P.O. Box 130, Dix, Illinois 62830. Online condolences may be made at www.osbornfuneral.com, or on the funeral home's Facebook page.

The family of Donald J. Ward created this Life Tributes page to make it easy to share your memories.

Send flowers to the Ward family.