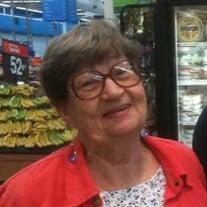 Dorothy "Dot" June Hollingsead (Burns), 82, of Mt. Vernon, passed away at 11:15 p.m. Thursday, June 15, 2017, at Mt. Vernon Health Care Center, after an extended illness. She was born May 23, 1935, in Mt. Vernon, the daughter of Samuel and Lethel (Cobb) Burns. She was married to Eldoris Frazier, and they later divorced. She later married Raymond Hollingsead, and they also divorced. She graduated from Mt. Vernon Township High School and attended Kaskaskia College, and worked as a personal assistant in home healthcare. She served as a Cub Scout Den Mother, a Girl Scout Troop Leader, and as Camp Nurse for Christian Church Camps. She loved cooking and baking, as well as sewing, knitting, crocheting, embroidery, and completing jigsaw puzzles. She was an avid reader. She is survived by one son, Stephen Frazier of Centralia; one daughter, Angie (Frazier) Richardson of Centralia; eight grandchildren, Stevi Frazier, Amanda Dodillet, Jennifer Scarbrough, Moriah Frazier, Scott Richardson, Cameron Richardson, Andrew Richardson, and Dana Richardson; five great grandchildren; and one brother, Charles Donald Burns of South Carolina. She was preceded in death by her parents; and two brothers, Robert and Gene Burns. In accordance with her wishes, cremation rites for Mrs. Hollingshead have been accorded, and a private memorial service will be held at a later date. Memorial gifts may be made to the Alzheimer's Association, and can be mailed to the Osborn Funeral Home, P.O. Box 130, Dix, Illinois 62830. Online condolences may be made at www.osbornfuneral.com, or on the funeral home's Facebook page.

The family of Dorothy "Dot" June Hollingsead created this Life Tributes page to make it easy to share your memories.

Send flowers to the Hollingsead family.