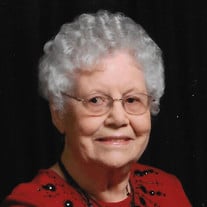 Dorothy Tinsley, 91, of Dix, passed away at 7:20 a.m. Wednesday, March 22, 2017, at Mt. Vernon Countryside Manor. She was born October 2, 1925, in Doniphan, Missouri, the daughter of Harrison and Della (Jarrett) Justice. On November 16, 1946, in Dix, she married Charles Frank Tinsley, and he preceded her in death on April 2, 2010. She was a member of Boyd Christian Church. She loved her family and enjoyed her grandchildren. During World War II, she worked in a munitions factory. Mrs. Tinsley is survived by three sons, Larry Tinsley and wife Maureen of Dix, Gary Tinsley and wife Marcia of Woodlawn, and Roger Tinsley and wife Candis of Dix; eleven grandchildren; eighteen great-grandchildren; and one great-great-grandchild. In addition to her husband, Charles Frank Tinsley, she was preceded in death by her parents; one daughter, Carla Perschbacher; one grandson, Tyler Dejournett; and three brothers, Oren, Homer, and George Justice. Funeral Services for Mrs. Tinsley will be held at 11:00 a.m. Saturday, March 25, 2017, at Boyd Christian Church, with Jim Watts and Chris Bean officiating. Burial will follow at Boyd Cemetery. Visitation will be held Friday, March 24, 2017, at the Osborn Funeral Home in Dix, from 5:00 p.m. to 7:00 p.m.. Memorial gifts may be made to the National Breast Cancer Foundation, and will be accepted at the service, or by mail to the Osborn Funeral Home, P.O. Box 130, Dix, Illinois 62830. Online condolences may be made at www.osbornfuneral.com, or on the funeral home's Facebook page.

The family of Dorothy Tinsley created this Life Tributes page to make it easy to share your memories.

Send flowers to the Tinsley family.