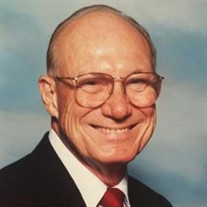 Dr. Earl George Hilger, 87, of Vero Beach, Florida passed away at Grace Nursing Center on April 29, 2016. A life member of the American Dental Association, this cheerful, generous, and highly respected man was known for high quality work and interactions in everything he put his hand to do. A tremendous asset to the dental profession, Earl was also a loving husband, father, grandpa, and great grandfather; he was an outstanding community leader as well. Dr. Hilger was a past president of the Columbia, Missouri, JAYCEES, Cosmopolitan Breakfast Club, and a life member of the Delta Sigma Delta dental fraternity. Hilger was influential in the establishment of a public bus system in Columbia by attending weekly City Council meetings for an entire year to keep the topic on the agenda. The only Son of Earl George Hilger, Sr. and Edna Steffan Hilger, Earl was born and raised in St. Louis, Missouri. He attended St. George Grade School and graduated from St. Mary’s High School in the class of 1945. He received his Doctoral Dental School degree from St. Louis University in the class of 1953, and he immediately volunteered to serve in the US Army, assigned to the 735th Medical Detachment, 31st MED GP, 7th Army, in Mannheim, Germany from 1953 to 1955, with an honorable discharge in 1961 following 6 years with the newly reformed Army Reserve. While remaining available for the Reserve, Dr. Hilger entered his first dental practice in Fredericktown, Missouri. Later, he maintained a private dental practice in Columbia, Missouri, until he retired in 1986 with 25 years of service. Throughout his practice, Dr. Hilger faithfully cared for his dedicated patients while he also maintained professional contacts and research, and completed publications, and lectures across the world. After retirement, Dr. Hilger kept his hand in the profession as a contract dentist at Homestead Air Force Base Hospital for 4 years. Earl Hilger enjoyed boating, travel, and storytelling about his many adventures. He enjoyed playing bridge and bocce ball. Known as Mr. Sociable, Earl’s laugh endeared him to many. He was a faithful member of the Catholic Church from childhood, most recently as a member of St. Helen Church of Vero Beach. Earl Hilger was the faithful husband of Jean Riley Hilger for 40 years, who will maintain their residence at Vista Plantation in Vero Beach. He is survived by his children: Carolyn (Claude) Cooper of Vero Beach, Randy (Manuela) Hilger of St. Louis. MO, Eugene (Betty Jo) Hilger of Ellettsville, IN, and Debra (Cue) Hilger of Columbia, MO. He also has surviving stepchildren: Linda (Rich) Geel of Burke, VA, William Simmons of Boulder, CO, and Patrick (Darleen) Simmons of St. Paul, MN. Grandchildren (with spouses & great grandchildren) include Jennifer Sullivan (daughter Abey), Jonah Sullivan (Jen and daughters Ruth & Nina), Skyler Hilger, Kyle Hilger (wife Aleena), David Hilger, Dalton Hilger, Andrew Geel, Tyler Geel (wife Lindsey, daughter Molly Jean, son Hudson), Bethany Geel Pearson (husband Matthew), Connor Simmons, Katie-Jay Simmons, Alex Simmons, and Jessica Simmons. Burial will be in Dix, Illinois. No funeral will be conducted, but a Celebration of Life will be held at a later date. Osborn Funeral Home in Dix is in charge of local arrangements, and online condolences may be made at www.osbornfuneral.com, or on the funeral home's Facebook page.

The family of Dr. Earl George Hilger created this Life Tributes page to make it easy to share your memories.

Send flowers to the Hilger family.