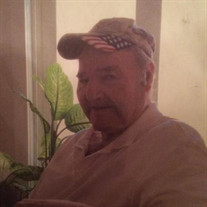 Eugene Moffitt, 82, of Dix, passed away at 7:10 a.m. Monday, January 4, 2016, at his home. He was born May 18, 1933, in Marion, Illinois, the son of Willie and Izell Moffitt. On July 3, 1956, in St. Louis, Missouri, he married Edna Patterson and she survives in Dix. He was a veteran of the United States Army and the United States Air Force, and enjoyed spending time with his children and grandchildren. He was an active member of Machinist Union District 9, Lodge #2345. He is survived by his wife Edna Moffitt of Dix; Five sons, David Moffitt and wife Jennifer of Oakfield, Wisconsin, Michael Moffitt of Dix, Illinois, Steven Moffitt and wife Linda of Belleville, Illinois, Mark Moffitt and wife Rhonda of Dix, Illinois, and Andrew Moffitt and wife Hope of Dix, Illinois; Two daughters, Katrina Moffitt Clark of Dix, Illinois, and Kimberly Moffitt McKowen and husband Kelly of Dix, Illinois; twenty-two grandchildren; and fifteen great-grandchildren. He was preceded in death by his parents and one daughter, Cynthia Moffitt. Funeral Services for Mr. Moffitt will be held at 1:00 p.m. Friday, January 8, 2016, at the Osborn Funeral Home in Dix, with Dan Lovin officiating. Burial will follow at Zion Grove Cemetery. Visitation will be held Thursday, January 7, 2016, from 5:00 to 7:00 p.m., at the funeral home. Memorials may be made to Zion Grove Cemetery and will be accepted at the service, or by mail to Osborn Funeral Home, P.O. Box 130, Dix, Illinois 62830.

The family of Eugene Moffitt created this Life Tributes page to make it easy to share your memories.

Send flowers to the Moffitt family.