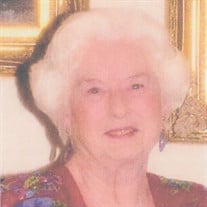 In her nearly 100 years on Earth, Frances Overstreet lived a life of Christian faith and of service. She was a lifelong member of the Methodist Church, and a member of the Alamo Heights United Methodist Church in San Antonio for 70 years. The Overstreets traveled the world with the military. One of the highlights of Frances' life occurred while they were stationed in Japan in 1948. Claude and Frances were assigned to escort Helen Keller and her companion, Polly Thomson, during their 5 day visit to Japan following World War II. Riding in military cars, surrounded by military security because of the crowds, Claude and Frances accompanied the two women on a goodwill tour of Japan. A very special moment for Frances was when Polly Thompson spelled out "Mrs. Overstreet" in Helen Keller's palm and, in her faltering voice, Helen said, "Nice to meet you, Mrs. Overstreet." While stationed in Germany, Frances started a bible study group for ladies attending the military chapel. It was called the "Women of the Chapel." She later started groups in Ft. Riley, Kansas, and Scott Air Force Base, Illinois. One Sunday, at Scott Air Force Base, the Chief of Chaplains for the entire US Air Force attended a World Day of Prayer chapel service, moderated by Frances, and conducted entirely by the women's group. After the service, he asked Frances to write up the procedures followed by the study group so that similar groups could be established in Air Force chapels worldwide. It was later picked up by the Army and, to the best of her knowledge, is still on all Army bases now. It is alive today, from the group that Frances started in Germany in 1954. Upon Claude's passing in 1998, Frances developed a personal ministry of helping widows heal from the loss of their husbands. She took them to her mountain cabin for time away from the distractions of home. Frances once told a friend, "If they wanted to stay upstairs and be alone, I let them. If they wanted to talk, I was waiting downstairs." And, of course, she fed them well. Frances Connaway was born October 14, 1920, in Texico, Illinois, to Harry Hayworth Connaway and Joe Anna Darnell Connaway. She married Claude Lee Overstreet in 1942. Frances was predeceased by her parents, her brother, Harold Ray, and her husband. Frances is survived by three children: Claudene (George) Lopez, Claude (Cheryl) Overstreet and Twila (Barry) Bowden. Her grandchildren are Dagny, Samantha and Tony Lopez and Georgette (Ryan) Helpingstine; Susan (Aaron) Overstreet Lyons and Brian (Victoria) Overstreet; John (Jasmyn) Bowden and Lynn (Marc) Bowden Robertson. Frances had 20 great grandchildren. Frances died May 1, 2020 of COVID-19 in Mt. Vernon, Illinois. She always said, "You never know what you will have to do to get out of this world." For Frances, it took a Global Pandemic. Because of the unusual times in which we are living, a virtual memorial service has been streamed from the Alamo Heights United Methodist Churchin San Antonio, TX. To view the service, please go to https://bit.ly/3c8oikm or https://www.youtube.com/watch?v=ZiBnyOioE5M Memorial donations may be sent to the Senior Ministry at Alamo Heights United Methodist Church, 825 E. Basse Road, San Antonio, Texas 78209. Online condolences may be made at www.osbornfuneral.com, or on the Osborn Funeral Home Facebook page.

The family of Frances Overstreet created this Life Tributes page to make it easy to share your memories.

In her nearly 100 years on Earth, Frances Overstreet lived a...

Send flowers to the Overstreet family.