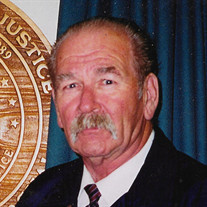 Frank "Sonny" Ristick, 75, of Salem, passed away at 4:38 p.m. Sunday, March 6, 2016, at SSM Good Samaritan Hospital in Mt. Vernon. He was born August 30, 1940, in Chicago, Illinois, the son of Frank and Mildred (Bank) Ristick. In Carlyle, Illinois, on May 1, 2013, he married Christine Bryant, and she survives in Salem. He served in the United States Army, and later served as a U.S. Marshall before his retirement. He was a Ham Radio Operator, and member of the Centralia Wireless Association, with the call "N9GRH." He was of the Apostolic Pentecostal faith. In addition to his wife, Christine Ristick, of Salem, he is survived by children, Michael Wooden, David Wooden, Steven Wooden and fiancee Whitney Shaw, Franky Ristick, Kenny Ristick, Linda Zeimer, Lori Magro-Genoa, and Cynthia Hohman and husband Kyle; grandchildren, Skyler Hohman, Alex, Aaron, Amanda and Aric Ristick, Andrew Zeimer, and Ashley and Nicole Ristick; and one sister, Sandy Sipula and husband Jim. He was preceded in death by his parents, Mildred and Frank Ristick; two step-fathers, Fred and George; and wife, Judy Ristick. Funeral Services for Mr. Ristick will be held at 11:00 a.m. Saturday, March 12, 2016, at The Apostolic Pentecostal Church of Salem, with Calvin Jean officiating. Burial will follow at Paradise Cemetery. Visitation will be held Friday, March 11, 2016, from 5:00 p.m. to 7:00 p.m., at the church. Memorials may be made to Christine Ristick, and will be received at the service, or by mail to the Osborn Funeral Home, who is in charge of arrangements. Online condolences may be made at www.osbornfuneral.com, or on the funeral home's Facebook page.

The family of Frank Ristick created this Life Tributes page to make it easy to share your memories.

Send flowers to the Ristick family.