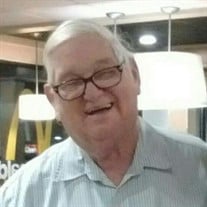 George R. Poston, 81, of Ashley, passed away Friday, March 23, 2018, at SSM Health St. Mary's Hospital in Centralia. He was born March 27, 1936, in Ashley, Illinois, the son of Robert L. and Annie (Downs) Poston. On July 5, 1959, in Nashville, Illinois, he married Lois Williams, and she survives. He graduated from Woodlawn High School in 1954, and attended St. Louis Christian College. He was the Pastor at Union Christian Church for 16 years, and served as a missionary to Haiti for 18 years. He was a member and Elder at Mt. Catherine Christian Church in Woodlawn. Mr. Poston was also a third generation logger, and collected chainsaws. His family and friends were very important to him. In addition to his wife, Lois Poston of Ashley, he is survived by one son, James Poston and wife Michelle of Ashley; two daughters, Mary Young of Oklahoma City, and Rebekah Mielke and husband Ben of Beaver Dam, Kentucky; two grandchildren, Ashley Turner and Robert Poston, both of Ashley; one sister-in-law, Barbara Poston of Harrisburg; one nephew, Mike Poston of Pomona, Illinois; one niece, Brenda Wolfe of Carbondale; two great-nephews, Bryon Poston of Pomona, and John Poston of Murphysboro; one great-niece, Heather Bollie of Murphysboro; three great-great-nieces; and many past students and friends in Haiti. He was preceded in death by his parents, and one brother, Tom Poston. Funeral services for Mr. Poston will be held at 10:00 a.m. Tuesday, March 27, 2018, at Mt. Catherine Christian Church in Woodlawn, with Jonathan Schnautz and Randy Sells officiating. Burial will follow at Mt. Catherine Cemetery. Visitation will be held Monday, March 26, 2018, from 4:00 p.m. to 8:00 p.m., at the church. Memorials may be made to Mt. Catherine Christian Church, and will be accepted at the service, or by mail to the Osborn Funeral Home, P.O. Box 130, Dix, Illinois 62830. Online condolences may be made at www.osbornfuneral.com, or on the funeral home's Facebook page.

The family of George R. Poston created this Life Tributes page to make it easy to share your memories.

Send flowers to the Poston family.