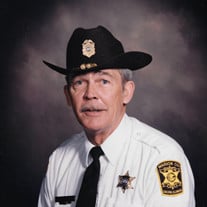 Gerald L. Benjamin, 81, of Iuka, passed away at 11:13 p.m. Tuesday, May 28, 2019, at Good Samaritan Hospital, in Mt. Vernon. He was born May 12, 1938, in Centralia, the son of Willard Ray and Hazel L. (Stewart) Benjamin. On May 15, 1956, at Odin Christian Church, he married Barbara J. (Quarterman) Benjamin, and she preceded him in death on December 7, 2009. He graduated from Irving Grade School, Centralia High School, and Police Academy at University of Illinois. Mr. Benjamin served as Marion County Sheriff until his retirement. He served in the United States Marine Corps, and was a member of Church of Christ, in Centralia. He was also a member of the Illinois Sheriff's Association, the National Rifle Association, Marion County Crime Stoppers, the Democratic Party of Marion County, the National Sheriff's Association, the DARE Program of Marion County, Wounded Warrior Project, Disabled Veterans Association, Marion County Democratic Committee, and the Conservative Caucus. Mr. Benjamin is survived by one son, Terry L. Benjamin and wife Rhonda of Dix; two daughters, Debbie L. Benjamin-Wolfe and husband Jeffery of Riverton, and Dianna K. Myers and husband Pat of Jonesboro; five grandchildren; ten great-grandchildren; and one brother, Donald Benjamin. In addition to his wife, Barbara Benjamin, he was preceded in death by his parents, Hazel and Willard Benjamin; one brother, Jerry Benjamin; and two granddaughters, Tori L. Benjamin, and Amanda Renae Brown. In accordance with Mr. Benjamin's wishes, cremation rites have been accorded, and a memorial service will be held at 11:00 a.m., June 15, 2019, at Osborn Funeral Home in Dix, with Jonathan Schnautz officiating. Burial will follow at Zion Grove Cemetery. Visitation will be held June 15, 2019, from 9:00 a.m., until the hour of service, at the funeral home. Memorial gifts may be made to Wreaths Across America, and will be accepted at the service, or by mail to the Osborn Funeral Home, P.O. box 130, Dix, Illinois 672830. Online condolences may be made at www.osbornfuneral.com, or on the funeral home's Facebook page.

The family of Gerald L. Benjamin created this Life Tributes page to make it easy to share your memories.

Send flowers to the Benjamin family.