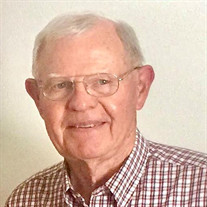 Gilbert L. Lowry, 85, of Centralia, passed peacefully at his home Tuesday morning, February 18, 2020, surrounded by his family. He was born January 10, 1935, in Kell, the son of Herbert and Myrtle (Wheeler) Lowry. On September 20, 1958, in Iuka, he married Ferva Clifton, and she survives. Mr. Lowry graduated from Salem High School in 1952, and served in the United States Army from 1955-1958, where he was part of the 10th Mountain Division, serving in Germany. He was a committed, lifelong Railroader, who started his career in 1952, firing steam engines for his father, at the age of 17. He worked for Illinois Central from 1952 until 1987, and then for Amtrak from 1987 to 1997, working a total of 45 years. He was a member of Central City Baptist Church. In addition to his wife, Ferva Lowry, he is survived by two daughters, Lora Lea Wernsman and husband Jamie of Lebanon, Ohio, and Mary Kay Castellari and husband Jeff of Centralia; two grandchildren, Tori Wernsman and Sam Wernsman of Cincinnati, Ohio; two sisters, Mildred Clark and Edna Pierce; and one half-sister, Reba Stover. He was preceded in death by his parents; one brother, Gleason Lowry; and half-siblings, Beulah Glenn, Mabel Estock, Ray Lowry, and Orville Lowry. Funeral services for Mr. Lowry will be held at 11:00 a.m. Monday, February 24, 2020, at the Osborn Funeral Home in Dix, with Marty Mills officiating. Burial will follow at Palestine Cemetery. Visitation will be held Monday, February 24, 2020, from 10:00 a.m. until the hour of service, at the funeral home. In lieu of flowers, memorial gifts may be made to the Leukemia and Lymphoma Society, and will be accepted at the service, or by mail to the Osborn Funeral Home, P.O. Box 130, Dix, Illinois 62830. Online condolences may be made at www.osbornfuneral.com, or on the funeral home's Facebook page.

The family of Gilbert L. Lowry created this Life Tributes page to make it easy to share your memories.

Gilbert L. Lowry, 85, of Centralia, passed peacefully at his...

Send flowers to the Lowry family.