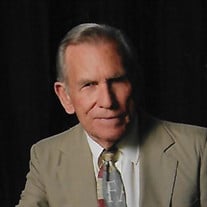 Harold L. "Pete" Beal, 90, of Dix, passed away at 3:20 a.m., Thursday, October 22, 2020, at his home. He was born on May 19, 1930, in Champaign County, Illinois, the son of Othello and Blanche (Elliott) Beal. He married Eunice Smith, who preceded him in death, and later married Mary Lee (Danner) Garren, and she survives in Dix. Mr. Beal became a Christian when he was 31 years old, and served in the Christian Church until his death. His Church membership had been at Calumet Street Church (formerly Hickory Street), and currently was a member at the Boyd Christian Church in Dix. His work included the Oil Belt Christian Camp in Flora, Illinois; Pinehaven Christian Children’s Home in Montana; Colegio Biblico, a Spanish speaking Christian Bible College in Eagle Pass, Texas; and Piedras Nigras, Mexico. He also served in Russia, Africa, and Haiti. He has ministered to thousands throughout the world with his work and words, and continued as a witness and testimony for his Lord until his death. Our lives were all blessed with his presence and Faith. He was a veteran of the Korean Conflict, serving in the United States Navy’s Sea-Bee’s from 1950 until 1954, in the Aleutian Islands and the Philippines, where he worked with heavy equipment. Beginning early in life, Pete worked on Rome Township roads and bridges and continued being a heavy-equipment operator, retiring in 2001, and continuing in Church Missions work until 2017. In addition to his wife, Mary Lee Beal of Dix, he is survived by one son, Scott Beal and wife Jeanie of Salem; two step-sons, Keith Smith and Tim Smith and wife Ann of Salem; three daughters, Sheila Beal of Dallas, Texas, Sherrill White of Sandoval, and Shellie Ross and husband James of Manathie, Mississippi; three step-daughters, Karla Smith, JuLee Hoke and husband Michael, and Gayanne Hoke and husband David; eight grandchildren, Erin Markworst, Amber Neeley, Kelly White, Richard White, Chloe Beal, Caden Beal, Joshua Cobb, Brandon Cobb, and eight step-grandchildren, Korey Smith, Keri Phillips, Kathleen Belew, Nicholas Smith, Faith Smith, Joshua Hoke, AshLee Willhite, and Caleb Hoke; twelve great-grandchildren; two step-great-grandchildren; one brother, Clyde Beal and friend Linda Davis of Mt. Vernon; one sister, Ada Standerfer and husband Jerry of Mt. Vernon; two sisters-in-law, Peggy Beal of Richview, and Cathy Brown of Chicago; and several nieces, nephews, and cousins. He was preceded in death by his parents; wives, Donna (Baldridge) Beal and Eunice Beal; and four brothers, Ron, Lawrence, Paul LeRoy Beal, and Cliff Beal. In accordance with Mr. Beal's wishes, cremation rites have been accorded, and a memorial service will be held at 4:00 p.m., Wednesday, October 28, 2020, at Boyd Christian Church, with Jeff Van Meter officiating. Burial will follow at Boyd Cemetery. Due to the current circumstances regarding the ongoing pandemic, attendees have the option to listen to the service from the parking lot of the church, by tuning their radios to 93.3 FM, at the appropriate time. A drive-through visitation will be held from 1:00 p.m. until 4:00 p.m., Wednesday, October 28, 2020, at Boyd Christian Church. In lieu of flowers, memorial gifts may be made to Pioneer Bible Translators, Colegio Biblico, or Pinehaven Christian Children’s Home, and will be accepted at the service, or by mail to the Osborn Funeral Home, P.O. Box 130, Dix, Illinois 62830. Online condolences may be made at www.osbornfuneral.com, or on the Osborn Funeral Home Facebook page.

The family of Harold L. "Pete" Beal created this Life Tributes page to make it easy to share your memories.

Send flowers to the Beal family.