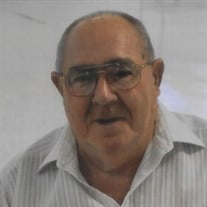 Harold L. "Bob" Eblin, 83, of Mt. Vernon, passed away Thursday, November 21, 2019, at his home. He was born May 3, 1936, in Iuka, the son of Noble R. and Vida Mae (Phelps) Eblin. On November 9, 1953, he married Anna Morgan, and she survives in Mt. Vernon. Mr. Eblin was a native of Mt. Erie, in Wayne County, Illinois. Mr. Eblin was a minister and began serving the Lord in 1975. He pastored several area churches. His passion in life was serving the Lord and preaching the word of God. He owned Eblin's Furniture for many years. In addition to his wife of 66 years, Anna Eblin; he is survived by three children, Randy Eblin and wife Gayle of Mt. Vernon, Bobby Worley and husband Bruce of Fairfield, Terry Eblin of Mt. Vernon; one granddaughter, Christina Lipe and husband Kane of Mt. Vernon; one great-grandson, Brian Williams, Jr., of Mt. Vernon; and one brother, Gene Eblin and wife Kitty of Tuscola. He was preceded in death by his parents, two sisters, and one brother. Funeral services for Mr. Eblin will be held at 1:00 p.m. Monday, November 25, 2019, at the Osborn Funeral Home in Dix, with Rev. James Jines officiating. Burial will follow at Zion Grove Cemetery. Visitation will be held from Noon until the hour of service on Monday, at the funeral home. Online condolences may be made at www.osbornfuneral.com, or on the Osborn Funeral Home's Facebook page.

The family of Harold L. "Bob" Eblin created this Life Tributes page to make it easy to share your memories.

Send flowers to the Eblin family.