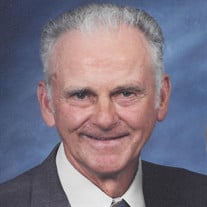 Harold Roy French, 89, of Bluford, passed away Wednesday morning, April 27, 2016 at his home. He was born in Farrington township on April 13, 1927, the son of Robert and Fern (Ellis) French. On October 15, 1955 in Mt. Vernon he married Alletta Clark and she survives. Mr. French was a lifelong farmer and worked construction until retiring in 1982. He was a graduate of Mt. Vernon Township High School and served as a school board member of Webber Township High School. He was a member of Donoho Prairie Christian Church and a veteran of the US Navy, serving in the Japanese Theatre at the end of World War II. In addition to his wife, Alletta French of Bluford, he is survived by three daughters, Cathy Bennett and husband Donald of Wayne City, Peggy Gardner and husband Lynn of Salem and Brenda Craig and fiancé Steve Jackson of Texico; six grand children, Emily Jones of Fairfield, Jonathan Gardner of Salem, Randy Gardner of Knoxville, Tennessee, Joshua Craig of Boulder Creek, California, Robert French-Ytterberg of Denver, Colorado and Aaron French-Ytterberg of Corvalis, Oregon; and two great grand children, Gavin and Taylor Jones of Fairfield. He was preceded in death by his parents; two sons, Robert Harold French and Kevin Bruce French; and one infant brother, Irvin French. Funeral services will be held Saturday, April 30, 2016 at 2:30pm at the Osborn Funeral Home in Dix, with Marty Mills officiating. Burial will follow at the Wells Chapel Cemetery. Visitation will be held Saturday at 12:30 pm until the funeral hour. In lieu of flowers memorials may be made to the donor's favorite charity and received at the Osborn Funeral Home, PO Box 130, Dix, Illinois 62830. Online condolences may be made at www.osbornfuneral.com, or on the funeral home's Facebook page.

The family of Harold Roy French created this Life Tributes page to make it easy to share your memories.

Send flowers to the French family.