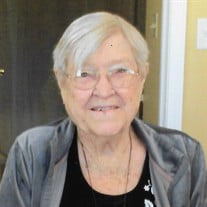 Hazel M. Chastain Riley, 102, departed this life to be with her Lord in Heaven on Monday, January 4, 2016, at her home in Mt. Vernon, Illinois. She was born October 16, 1913, in Mt. Vernon, the daughter of Charles and Martha (Mumbower) Thomson. She first married Roy Chastain, and he preceded her in death. She then married Oscar Riley who also preceded her in death in 2008. Mrs. Riley was a member of Pleasant Hill Baptist Church and worked for the Brown Shoe Company in Mt. Vernon for more than forty years. Mrs. Riley is survived by many nieces and nephews, including Larry Thomson and wife Pat of Charleston, Arkansas, Charles Peterson and wife Delores of Coffeen, Illinois, Bill Townsend and wife Marilyn of Fort Wayne, Indiana, and Carol Sue Bateman and husband David of Oregon, Illinois; Stepchildren, Lillie Marlow and husband Leslie of Dix, and Charles D. Riley and wife Katie of Hillsboro, Oregon; Step-grandchildren, Michael Marlow and wife Lena, Sandra Work and husband Ted, Brad Riley, and Robin Edwards and husband Jamie; Step-great-grandchildren, Patrick Work and wife Patricia, Shannon Juarez and husband Raul, Jesse Collins, and Aaron Edwards; Step-great-great-grandchildren, Isabelle, Kaitlyn and Hannah Juarez, and Kaylee Work; Sisters-in-law, Mary Ann Beal and husband Wayne, Doris Riley, and Wanda Riley; and Brothers-in-law, Billie Riley and wife June and Harry Riley. In addition to her parents, and both husbands, she was preceded in death by seven siblings. Funeral Services for Mrs. Riley will be held at 1:00 p.m., on Thursday, January 7, 2016, at the Osborn Funeral Home, with David Bateman officiating. Burial will follow at Hopewell Cemetery. A Visitation will be held Wednesday, January 6, 2016, from 5:00 p.m. until 7:00 p.m., at the funeral home. Memorials may be made to the American Cancer Society, and will be accepted at the service, or by mail to the Osborn Funeral Home, P.O. Box 130, Dix, Illinois 62830.

Hazel M. Chastain Riley, 102, departed this life to be with her Lord in Heaven on Monday, January 4, 2016, at her home in Mt. Vernon, Illinois. She was born October 16, 1913, in Mt. Vernon, the daughter of Charles and Martha (Mumbower) Thomson. She... View Obituary & Service Information

The family of Hazel M. Chastain Riley created this Life Tributes page to make it easy to share your memories.