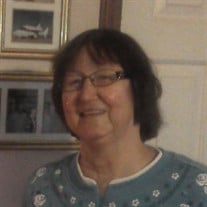 Ida Lillian (May) Clark, 72, of Centralia, and formerly of Boyd, died at 7:27 p.m. Saturday, February 20, 2016, at Crossroads Hospital in Mt. Vernon. She was born in Hampton, Kentucky on February 2, 1944, the daughter of John and Virginia (Ledbetter) May. On November 9, 1963, in Valley View, Illinois, she married Billie Lee Clark, and he preceded her in death on April 11, 1992. She was an employee of the State of Illinois for 35 years, and worked as a Mental Health Technician at Murray Center. Mrs. Clark enjoyed her yearly visit to Balloon Fest, and was an avid fan of the St. Louis Cardinals and country music. She was a breast cancer survivor and was of the Baptist faith. She was an avid bird watcher, and especially enjoyed eagles. She loved animals, especially her pet, and enjoyed the outdoors and nature. She also loved and collected angels. She is survived by three sons, John Clark and wife Marilee of Ewing, Jeffery Lee Clark of Centralia and Paul Russell Clarkof Centralia; two grandchildren, Sarah Lowery and husband Jared of Bluford and Daniel Fairchild of Ewing; three great grandchildren, Tamrah and Lauren Lowery of Bluford and Sebastian Fairchild of Ewing; two brothers, Ronald May and wife Betty of Florida, and Charles May of Texas; four sisters, Mary Steele of Elgin, Patricia May of Elgin, Ginger Potts of Indiana, and Sally Hines of Kentucky; and several nieces and nephews. She was preceded in death by her parents, her husband, and one sister, Sarah Fox. Funeral Services for Mrs. Clark will be held at 1:00 p.m. Friday, February 26, 2016, at Osborn Funeral Home in Dix, with Chaplain Dan Lovin officiating. Burial will follow at Boyd Cemetery. Visitation will be held Thursday, February 25, 2016, from 5:00 to 8:00 p.m. at the funeral home. A Walkthrough will be accorded by the Jefferson County Sheriff Department. Memorials may be made to the American Cancer Society or the National Kidney Foundation, and will be accepted at the funeral home, or by mail to the Osborn Funeral Home, P.O. Box 130, Dix, Illinois 62830.

Ida Lillian (May) Clark, 72, of Centralia, and formerly of Boyd, died at 7:27 p.m. Saturday, February 20, 2016, at Crossroads Hospital in Mt. Vernon. She was born in Hampton, Kentucky on February 2, 1944, the daughter of John and Virginia (Ledbetter)... View Obituary & Service Information

The family of Ida Lillian (May) Clark created this Life Tributes page to make it easy to share your memories.

Send flowers to the (May) Clark family.