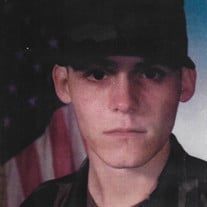 James Scott Reeves, 53, of Carbondale, passed away at 9:11 p.m., Sunday, November 21, 2021, at Carbondale Memorial Hospital. He was born September 5, 1968, in Fort Lauderdale, Florida, the son of Jerry and Brenda Reeves. He attended Shawnee Community College and Southern Illinois University, and was a member of Phi Theta Kappa. He was a veteran of the United States Army, serving from 1989 until 1993, achieving the rank of Specialist. James had a hunger for life and anyone that knew him or met him could see that. He loved his family, and would do anything for them. James also loved to read, learn, and play video games, and most of all, loved being around people. His friends in Carbondale would call him the "King of Carbondale." He was well-known and loved by the students of SIU and was dearly respected. He also attended Shawnee Community College, and was called a saint and scholar by his friends. He had two sayings, "It's not so much what life does with you, but what you do with your life," and "If you're given challenges, you have two choices. You can either be defeated by them, or you can defeat them. Nothing is so bad that you can't get around it." James loved his cat, Sloan, who was a big part of his life. The world will not be the same without his bright, shining smile. James is survived by his mother, Brenda K. (Murphy) Tuggle and friend Raymond Elliot (A.J.); one brother, William Joseph Staley; one sister, Leslie Dunn and husband Thomas; and many nieces, nephews, and great-nieces-and-nephews. He was preceded in death by his step-father, Charles Tuggle; great-niece, Willow Swan; maternal grandparents, Ernest and Lena Murphy; and two aunts, Linda Murphy and Margaret Rollinson. In accordance with his wishes, cremation rites have been accorded, and a gathering for his family and friends will be held Monday, December 13, 2021, from 5:00 p.m. until 7:00 p.m., at the Osborn Funeral Home in Dix. Memorial gifts may be made to Mrs. Brenda Tuggle, and will be accepted at the service, or by mail to the Osborn Funeral Home, P.O. Box 130, Dix, Illinois 62830. Online condolences may be made at www.osbornfuneral.com, or on the Osborn Funeral Home Facebook page.

The family of James Scott Reeves created this Life Tributes page to make it easy to share your memories.

Send flowers to the Reeves family.