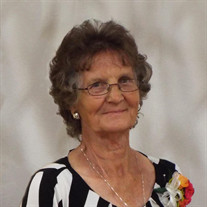 Janet Eileen Sager, 75, of Kell passed away on Saturday afternoon, February 25, 2017 at her home surrounded by her family after a courageous battle with cancer. Janet (Gowler) Sager was born December 8, 1941, in Mt. Vernon and was the daughter the late Roy and Opal (Highsmith) Gowler. She married G. Irvin Sager on July 8, 1961 at Campground Church in Mt. Vernon. Janet and Irvin celebrated their 55th wedding anniversary on July 3, 2016 and enjoyed a special celebration where Janet especially enjoyed visiting with many family and friends. Visitation will be held at Osborn Funeral Home in Dix, IL on Wednesday, March 1. Friends and relatives are invited to visit with the family from 11am to 1pm on Wednesday at the funeral home. Graveside service & burial will be 1:30 PM at the Old Donoho Prairie Cemetery in Texico, IL. Janet owned Sager Farms, along with her husband, where they have grown and sold strawberries, peaches and apples in addition to other fruits and vegetables for over 40 years. Janet enjoyed sewing, gardening, and helping Irvin tend to the fruit. She loved interacting with her customers many of whom had become special friends to her over the years. She was an avid NASCAR fan. Janet was happiest being on the farm and her final wish was to be able to come home one more time to see the orchard, which she did. Janet is survived by her husband, Irvin, and their four children: Deann (Michael) Sager of Texico; Diann (Doug) Sanford of Salado, TX; Robert (Tina) Sager of Kell; and Lisa (Dave) Earp of Mattoon, IL. They have 10 grandchildren: USMC LCPL Jacob Sager of Camp Pendleton, CA; Jonathan (Gretchen) Sparling of Dallas, TX; Amanda Sparling and fiance Badr Benour of Dallas, TX; Kayla Sager of Independence, MO; Katelyn Sager of St. Louis, MO; Kelly and Kasey Sager of Kell; Chloe, Ashley, and Brooke Jobe of Mattoon, IL; step-daughter Grace Earp of Mattoon, IL; and one great-grandchild Tanner Sparling of Dallas, TX. Brothers Carl (Shirley) Gowler of Effingham, IL and Larry (Sharon) Gowler, of Mt. Vernon, IL; sister-in-law Wanda (Kurt) Thiele of Florence, KY; sister-in-law, Glenda (Mike) Pfeilschifter of Matthews, NC; and special family friend, Holly Hayes, of Kell. She was preceded in death by one brother, Ronald Gowler of Florence, KY, and nephew Tim Gowler of Social Circle, GA. In lieu of flowers, memorials made be made to the American Cancer Society or the Old Donoho Prairie Cemetery of Texico, IL.

Janet Eileen Sager, 75, of Kell passed away on Saturday afternoon, February 25, 2017 at her home surrounded by her family after a courageous battle with cancer. Janet (Gowler) Sager was born December 8, 1941, in Mt. Vernon and was the daughter... View Obituary & Service Information

The family of Janet Eileen Sager created this Life Tributes page to make it easy to share your memories.

Janet Eileen Sager, 75, of Kell passed away on Saturday afternoon,...

Send flowers to the Sager family.