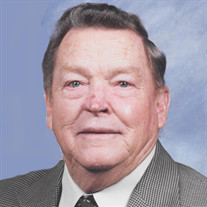 Jimmie Gale McBride, 85, of Dix, died at 3:15 p.m. Thursday, November 3, 2016, in Mt. Vernon, Illinois. He was born in Dix, Illinois, on February 8, 1931, the son of Jesse and Dorothy (Riley) McBride. On November 6, 1955, at Pleasant Hill Baptist Church, he married Marilyn Harlow, and she survives. He graduated from Dix Grade School and Centralia High School, before serving in the U.S. Navy. He retired from Illinois Central Gulf Railroad as an electrician, and also worked as a farmer. He was a member of Pleasant Hill Baptist Church. In addition to his wife, Marilyn McBride of Dix, he is survived by two sons, Jimmie McBride and wife Pam of Decatur, and David McBride and wife Lisa of Johnston City; four grandchildren, Christopher, Chelsea, Garrett, and Halle; four great grandchildren, Mariah, Landen, Breanne, and C.J.; and two great-great grandchildren, Noah and Jonathan. He was preceded in death by his parents; one son, Michael McBride; one granddaughter, Nichole; and four brothers, Gene, Lewis, Dale and Clyde McBride. Funeral services for Mr. McBride will be held 2:00 p.m. Monday, November 7, 2016, at Osborn Funeral Home in Dix, with Rev. Jack Lucas officiating. Burial will follow at Pleasant Hill Cemetery. Visitation will be held from 12:00 p.m. until the hour of service on Monday. Memorials may be made to the American Cancer Society, and will be received at the service, or by mail to the Osborn Funeral Home. Online Condolences may be made at www.osbornfuneral.com, or on the funeral home's Facebook page.

The family of Jimmie Gale McBride created this Life Tributes page to make it easy to share your memories.

Send flowers to the McBride family.