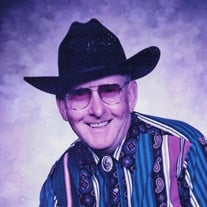 John Robert Bundy, 88, of Kell, went home to be with the Lord at 8:38 p.m. Sunday, June 10, 2018, at his home. He was born August 11, 1929, in Malta, Illinois, the son of Burell Lester and Ruby Evelyn (Shepard) Bundy. In 1950, he married Louise Johnson, and she preceded him in death in 1980. He later married Loretta Weaver Sager in September of 1991, at Arrington Prairie (Bailey) General Baptist Church, in Wayne City, Illinois, and she survives. He graduated from Bluford High School, and served in the United States Navy, from 1947 until 1951. He retired from Community State Bank in Salem. He was a member of Boyd Christian Church, and loved horseback riding. In addition to his wife, Loretta K. Bundy, of Kell, Mr. Bundy is survived by one daughter-in-law, Brenda Bundy; two grandchildren, Derek E. Bundy and wife Shaunda of Salem, and Leigh Ann Bundy of Mt. Vernon; and four great-grandchildren, Abbie Harris, and Lanie, Libbie, and Owen Bundy, all of Salem. He was preceded in death by his parents; his first wife, Louise Bundy; one son, David E. .Bundy; and one sister, Wanda Bundy. Funeral Services for Mr. Bundy will be held at 10:00 a.m. Thursday, June 14, 2018, at Osborn Funeral Home in Dix, with Jeff Van Meter officiating. Burial will follow at Opdyke Cemetery. Graveside Military Rites will be accorded by American Legion Post #141, of Mt. Vernon. Visitation will be held Wednesday, June 13, 2018, from 6:00 p.m. to 8:00 p.m., at the funeral home. Memorial gifts may be made to the Opdyke Cemetery, and will be accepted at the service, or by mail to the Osborn Funeral Home, P.O. Box 130, Dix, Illinois 62830. Online condolences may be made at www.osbornfuneral.com, or on the funeral home's Facebook page.

The family of John Robert Bundy created this Life Tributes page to make it easy to share your memories.

Send flowers to the Bundy family.