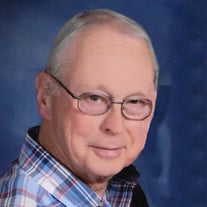 John Conrad Hosie, Sr., 76, of Dix, and formerly of St. Louis, passed away on Friday, Nov. 29, 2019, at his home. He was born on October 20, 1943, in St. Louis, the son of Elmer Frank and Dorothy (Reifiess) Hosie. On July 2, 1980, in Alpena, Michigan, he married Adelheid Sullivan, and she survives in Dix. Mr. Hosie enjoyed traveling and was a veteran of the U.S. Army, serving from 1961 to 1964. He was a member of Faith Lutheran Church in Mt. Vernon. In addition to his wife, he is also survived by four children: John Hosie, Jr. and wife Stacy of Springfield, IL, Carol Ann Schmelderer and husband Lee of St. Louis, MO, Jason Moore of Vandalia, and Mark Hosie and wife Shelley of Dix; nine grandchildren, John Hosie III, Danielle Hosie, Jordan Schmelderer, Loran Schmelderer, Noah Moore, Jacob Moore, Sarah Hosie, Brooklyn Hosie, and Rebecca Hosie; and one brother, James Hosie and wife Pearl of St. Louis. He was preceded in death by his parents; an aunt, Adele Peiera; and an uncle John F. Hosie. In accordance with his wishes, cremation rites were accorded, and a graveside service will be held at 2:00 p.m., Saturday, July 11, 2020, at Biddleborn Cemetery in rural Marissa. Online condolences may be made at www.osbornfuneral.com, or on the Osborn Funeral Home's Facebook page.

The family of John Conrad Hosie Sr. created this Life Tributes page to make it easy to share your memories.

Send flowers to the Hosie family.