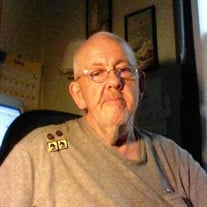 John Robert Menke, 79, of Mt. Vernon, Illinois, went to be with our Lord on March 4, 2019. John Robert was born in McLeansboro, Illinois, son of Rev. Harold F. Menke, Ph.D., and Sophronia Robinson Menke. The family attended the First Baptist Church of McLeansboro. John and sister Mary Jane were baptized there. He was married to Virda Kay McDonald 1960-1966. He is survived by twin sons, John Keith of Mt. Vernon and James Kevin of California; and a sister, Dr. Mary Jane Menke (formerly of Mt. Vernon and Centralia now living in Florida.) John was preceded in death by his parents and a brother, Max E. Woodruff of McLeansboro. In accordance with his wishes, cremation rites have been accorded, and a visitation will be held at 1:00 pm on Monday, April 22, 2019, at the Mt. Vernon Baptist Temple, 817 Woodland Drive, a short distance from Bethel Cemetery on Rt. 37 south, Mt. Vernon. A Celebration of Life service will follow at 2:00 pm at the church. Burial will be at Bethel Cemetery. John Robert's education included graduation from Mt. Vernon Township High School 1957, Mt. Vernon Junior College, 1959. He received B.A. and M.A. degrees in chemistry from SIU in 1962 and 1963, and completed Ph.D. course work in chemistry at Wayne State University in Detroit, Michigan 1963-1967. He wrote several publications in chemical and medical journals, worked on research for NASA at Ames Research Center in California, and at Ash-Stevens, Inc. in Detroit. He also edited and published a book of childhood memories, penned by his mother. John was an accomplished chess player. The U.S. Chess Federation sent a letter to his family stating "Chess lost one of its great ones in March of this year with the death of John Menke of Mt. Vernon, Illinois." His record with them included 167 contests, with only one loss. He was CCLA Champion in 2004 and 2005, Golden Knights Champion in 2003, and 1st place in 2004 with the Electronic Knights. In the Absolute Championships, he finished 1st place in 2011 and 2012, and in 2010 he was awarded the international ICCM title as chess champion. When in high school, everyone in the family was a ham radio operator. John enjoyed playing golf. John aka Johnny Bob, later became interested in computers, wrote computer software, did troubleshooting and maintained a website for family genealogy and local discussion boards. He ran for Mt. Vernon City Council in 2017, and was a passionate advocate for various environmental causes. John enjoyed watching and feeding birds, gardening, and lawn care. He fought health battles, including Parkinson's disease. He survived two bouts with cancer thanks to excellent care at Barnes Hospital in St. Louis. He had a strong Christian upbringing, and is now at peace Online condolences may be made at the Osborn Funeral Home website, www.osbornfuneral.com, or on the funeral home's Facebook page.

The family of John Robert Menke created this Life Tributes page to make it easy to share your memories.

Send flowers to the Menke family.