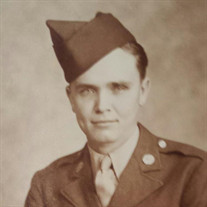 Kenneth Dewey Pierce, 99, of Mt. Vernon, passed away at 12:24 p.m. Wednesday, November 22, 2017, at his home. He was born November 18, 1918, in Bluford, Illinois, the son of Johnie and Anna (French) Pierce. On October 7, 1940, he married the love of his life, Vera Margaret Ganieany, and she survives in Mt. Vernon. He graduated from Papertown grade school and high school, and was a member of New Home Church. He served in the United States Army from 1941 until 1945. He was a well known farmer, and was proud of his 20 years of employment with Caterpillar Tractor in Joliet, as a welder. He was a hardworking man; A man of integrity, kindness, and insight, who was a joy to all who knew him. He loved people old and young, and always had time for conversation. He said of his relationship with Jesus, "I would not have gotten to the first fence post without the Lord." In addition to his wife, Vera Pierce, of Mt. Vernon, he is survived by one daughter, Gloria Dudek and husband Ron of Joliet; six grandchildren, Larry Pierce, Jr., and wife Angie of Alabama, Steven Dudek of Chicago, Lana Draper and husband Robert of Mt. Vernon, Scott Dudek and wife Martha of Brentwood, Tennessee, Tim Dudek of Savoy, Illinois, and Kevin Pierce of Addieville, Illinois; eight great-grandchildren; two sisters, Lorene Johnson of Cisne, and Norma Jean Holloway of Florida; nine great-great grandchildren; Numerous nieces and nephews; and precious friends, especially those at New Home Church. He was preceded in death by one son, Larry J. Pierce, who preceded him in April 2017; one grandson, Keith Pierce, who passed away in 1996; his parents; three sisters, Eleanor Pierce, Pearl Gill, and Opal Donoho; two brothers, Johnie Pierce and Hubert Pierce. Funeral Services for Mr. Pierce will be held 11:00 a.m. Monday, November 27, 2017, at New Home Church, with Pastor Harry Thomason officiating. Burial will follow at Wells Chapel Cemetery, Visitation will be held Sunday, November 26, 2017, at Osborn Funeral Home in Dix, from 4:00 p.m. until 6:00 p.m.. Online condolences may be made at www.osbornfuneral.com, or on the funeral home's Facebook page.

The family of Kenneth Dewey Pierce created this Life Tributes page to make it easy to share your memories.