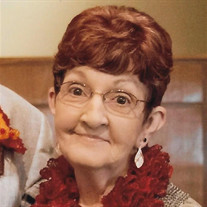 Ladonna Marlow, 74, of Texico, passed away at 4:30 a.m. on July 22, 2016 at her home. She was born in Harmony, IL on September 24, 1941 to Ronald and Doris Chambliss. On October 13, 1957 she married Don Marlow at the groom's parents' home. Mrs. Marlow graduated from Marlow grade school, Webber Township High School and Rend Lake College and was a member of the Dix United Methodist Church. Ladonna learned to play the piano as a child. She started playing at church each Sunday as a young lady, and continued until three months ago. She learned to make baskets more than twenty years ago and many of her beautiful baskets are in homes in the Jefferson and surrounding counties as well as those sold at craft fairs. After retiring as a nurse from Good Samaritan Hospital in 2007, she took up the dulcimer. She played with her groups, The Monday Night Strummers and the Thursday Night Thunder, at the Jefferson County Historical Society's Heritage Days Festivals. She played these events yearly as well as at local retirement homes and other events. Ladonna was a good and caring nurse. We have all been told through the years "Ladonna took such good care of my loved one". Her care is remembered by many, but most of all she was the best wife, mother, grandmother, great grandmother and sister. She was surrounded by her family and friends during her last week at home, Her granddaughter Alesha, a registered nurse, cared for her ceaselessly. Together they enjoyed playing the piano and flute. Her granddaughter Kacie, also a registered nurse, with a new bay Hadley, also cared for her.. Everyone else was thankful to do what we could do to help. She blessed us with her humor through it all. She also gave us so many instructions, "Be sure to do this or that". She never stopped saying 'Thank You" and especially "I love you." In god's time, we will meet her again on God's golden shore. She is survived by her husband Don Marlow of Texico; two sons, Ricky Marlow and wife Sharon of Centralia, and Gregory Marlow and wife Deborah of Dix; one daughter, Kimberly Kern and husband Jim of Arrowsmith, IL; eight grand children, Alesha Kern, Kacie Zielsdorf and husband Matt, Eric Kern and wife Kristi, Levi Kern, Julia Marlow, Elizabeth Marlow, Brandon Hurst and Amy White; eight great grand children, Elijah, Josie and Alexandria Allen, Hadley Zielsdorf, Blake Garner and wife Lauren, Austin and Luke Wilson, Breanne Hurst, and Titus Kern who is coming soon; a sister, Sheila Byars and husband Henry of Marlow, IL; and a half sister, Sue Jones of Herrin, IL. She was preceded in death by a son, Jeffrey Marlow; a daughter, Debra Marlow; her mother, Doris Stirewalt; step father, Dean Stirewalt; her father, Ronald Chambliss; and a half brother, Ronnie Chambliss. Funeral Services will be Wednesday, July 27, 2016, at 2 p.m., at the Osborn Funeral Home in Dix with Michael Hall and Glenn Hulvey officiating . Burial will be at Oakdale Cemetery in rural Bluford. Visitation will be Tuesday from 5 to 7 p.m. at the funeral home. Memorials may be made to the Oakdale Cemetery or the Dix United Methodist Church and will be received at the service or can be mailed to the Osborn Funeral Home, P.O. box 130, Dix, IL 62830. Online condolences may be made at www.osbornfuneral.com or on the funeral home's Facebook page.

The family of Ladonna Marlow created this Life Tributes page to make it easy to share your memories.

Send flowers to the Marlow family.