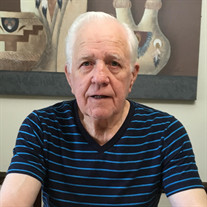 Lester Raymond James (Chip), passed away peacefully on December 4, 2020, after a long struggle with Alzheimer's disease. His loving and forever wife of 64 years, Nancy James (nee Dodd, was his sole care provider and was by his side when he passed. He was preceded in death by his mother, Dora Miller James and his father John James. He was also preceded by his six brothers, Robert, Thurman (Bud), Lenny, Ernest, Wesley, Richard, and his sister Mary Lee. In addition to his wife, Nancy James, he is survived by his beloved daughters, Sherry (Rich) Anderson, Tammy (Michael) Bandy, and his wonderful son Alan James; his grandchildren, Shawna, Cody, Nicolas, Josh, Bryce, Jason, Justin, Jeremy, Jamie, Brianna, and Jayvin; twelve great-grandchildren; and many nieces and nephews. Lester was born in Broseley, Missouri, on May 18, 1938. He built his family in Naperville, Illinois, then moved, and would have Sunday dinner with the grandkids in Minooka, Illinois, before finally retiring to Mt. Vernon, Illinois. Lester was first and foremost a devoted husband and father. He was a hard worker, giving over 50 years with the Local 597 Pipefitters Union, and was known by all the pipefitters as "Chip". He was an avid golfer and loved to enjoy the sport with his friends and grandkids. He loved to sing and play the guitar, and to bring a smile to anyone who would listen. Lester was a faithful member of the Church of Jesus Christ of Latter-Day Saints. Lester enjoyed life and wanted everyone else to enjoy it. He will be remembered as being quick to laugh, a ready smile on his face, and a love for motivating and helping others. He will be deeply missed by his family and friends. In accordance with his wishes, cremation rites have been accorded, and a Zoom Memorial Service will be held at a later date. In lieu of flowers, memorial gifts may be made to the Alzheimer's Association or to SSM Hospice, and will be accepted by mail to the Osborn Funeral Home, P.O. Box 130, Dix, Illinois 62830. Online condolences may be made at www.osbornfuneral.com, or on the Osborn Funeral Home Facebook page.

Lester Raymond James (Chip), passed away peacefully on December 4, 2020, after a long struggle with Alzheimer's disease. His loving and forever wife of 64 years, Nancy James (nee Dodd, was his sole care provider and was by his side when he passed.... View Obituary & Service Information

The family of Lester Raymond "Chip" James created this Life Tributes page to make it easy to share your memories.

Send flowers to the James family.