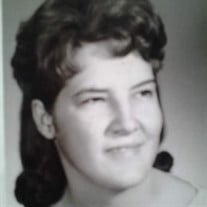 Leta Rose Quarterman-Chapman, 67, of Dix, passed away Saturday afternoon, Feb. 18, 2017, at her home. She was born October 4, 1949, in Mt. Vernon, the daughter of William Quarterman and Geneva McCrary Quarterman. On May 22, 1999, she married Tom Chapman, in a ceremony at his parent's home. She was a member of Woodlawn Baptist Church, and enjoyed visiting cemeteries and mowing grass. She worked at Jeffersonian Nursing Home, Defender Services, JC Penney's, and as a custodian at Woodlawn and Raccoon Schools. She was also a home health caregiver for many years. She is survived by her husband, Tom Chapman of Dix; three children, Kim Crawford, Brian Quarterman, and Kelly Quarterman; three grandchildren, Dallas Quarterman, Hunter Quarterman, and Marteena Quarterman; one brother, Gene Quarterman; three sisters, Irene Sutherland, Lorene Sloat, and Susie Smith; and two brothers-in-law, Wayne Stuber and Gerald Benjamin. She was preceded in death by her parents; two brothers, Bennie and Eddie Quarterman; three sisters, Mildred Linder, Barbara Benjamin, and Cathy Stuber; and one brother-in-law, Ron Sutherland. Funeral Services for Mrs. Chapman will be held at 7:00 p.m. Thursday, February 23, 2017, at Osborn Funeral Home in Dix, with Marty Mills and Carl Gaebe officiating. In accordance with her wishes, cremation rites will be accorded, following the funeral service. Visitation will be held from 4:00 to 7:00 p.m. Thursday, at the funeral home. In lieu of flowers, memorial gifts may be made to the Osborn Funeral Home, to assist with funeral expenses, and will be received at the service, or by mail to the Osborn Funeral Home, PO Box 130, Dix, Illinois 62830. Online condolences may be made at www.osbornfuneral.com, or on the funeral home's Facebook page.

Leta Rose Quarterman-Chapman, 67, of Dix, passed away Saturday afternoon, Feb. 18, 2017, at her home. She was born October 4, 1949, in Mt. Vernon, the daughter of William Quarterman and Geneva McCrary Quarterman. On May 22, 1999, she married... View Obituary & Service Information

The family of Leta Rose Quarterman-Chapman created this Life Tributes page to make it easy to share your memories.

Send flowers to the Quarterman-Chapman family.