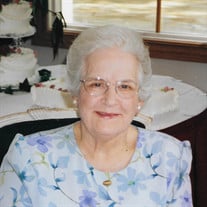 Mamie P. (Sledge) Simmons, 96, of Texico, passed away at 8:20 p.m., Monday, February 25, 2019, at Hamilton Memorial Rehabilitation and Health Care Center, in McLeansboro. She was born October 30, 1922, in Marion, Illinois, the daughter of Raymond and Ruby (Humphrey) Sledge. On January 9, 1942, in St. Charles, Missouri, she married Eugene Simmons, and he preceded her in death on May 31, 1991. She graduated from Mt. Vernon Township High School, and was a member of Panther Fork Missionary Baptist Church. She enjoyed growing roses. Mamie worked as a bookkeeper for Byrd-Watson Pharmacy, in Mt. Vernon, before she retired at age 85, endured and recovered from heart valve transplant at age 90, and passed her driver's license exam in October 2018, at the age of 96. According to family stories, she was a very amazing lady. Mrs. Simmons is survived by two sons, Gary G. Simmons of Kansas City, Missouri, and Ronald R. Simmons and his wife Jo Ann (King) Simmons of Glenville, Pennsylvania; seven grandchildren; eight great-grandchildren; and two sisters, Wilma Nadine (Sledge) Jenkins of Centralia, and Minnie Ann (Sledge) Maronski of Downingtown, Pennsylvania. In addition to her husband, Eugene Simmons, she was preceded in death by one daughter, Linda Leigh (Simmons) Hester; one son-in-law, Tommy Lee Hester; one daughter-in-law, Marcia M. (Thorsen) Simmons; two brothers, Walter R. Sledge and Lester F. Sledge; and two sisters, Edith M. (Sledge) Ellis and Mabel M. (Sledge) Alvis. Funeral services for Mrs. Simmons will be held at 11:00 a.m. Friday, March 1, 2019, at Panther Fork Missionary Baptist Church, with Rev. John Ashby officiating. Burial will follow at Panther Fork Cemetery. Visitation will be held Thursday, February 28, 2019, at the Osborn Funeral Home in Dix, from 5:00 to 7:00 p.m.. Memorial gifts may be made to Panther Fork Missionary Baptist Church, and will be accepted at the service, or by mail to the Osborn Funeral Home, P.O. Box 130, Dix, Illinois 62830. Online condolences may be made at www.osbornfuneral.com, or on the funeral home's Facebook page.

The family of Mamie P. Simmons created this Life Tributes page to make it easy to share your memories.

Send flowers to the Simmons family.