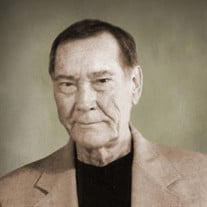 Marvin Eugene "Gene" Harris, 75, of Mt. Vernon, passed away peacefully on May 24, 2016, at Nature Trail Health Care Center, in Mt. Vernon. He was born October 7, 1940, in Naylor, Missouri, the son of Elmer and Agnes (Johnson) Harris. On May 29, 1969, in St. Clair Shores, Michigan, he married Betty JoAnn Matlock, and she survives in Mt. Vernon. Mr. Harris graduated from Mt. Vernon Township High School and received a degree from Mt. Vernon Junior College and Southern Illinois University Carbondale. He served in the United States Air Force for 4 years, and received many awards. He taught in many of the local area schools, and helped open Ford Square of Mt. Vernon. He was the General Manager of King City Chrysler, where he retired after 21 years. He enjoyed watching the St. Louis Cardinals, the St. Louis Blues, Golf, and Auto Racing. In addition to his wife, JoAnn Harris, he is survived by two children, Joy Kingsley and husband Bert of Kell, and Mark Metje and wife Melodie of Jackson, Missouri; Four grandchildren, Ashley Metje of Cape Girardeau, Missouri, Kylee Gobin and husband Drew of Benton, Kentucky, Kristen Booher and husband Alan of Salem, and Audra Nix and husband Kyle of Salem; Five great grandchildren, whom he loved dearly, Halle, Colton, Kellen, Owen, and Savannah; one sister, Janice Moore and special friend Thomas Muchowski of Wilmington, Illinois; two nephews, Byron and Deb Moore, and Mike and Nonnie Moore, of Wilmington, Illinois; special cousin, Loyd Harris and wife Dawn; Two great nieces, Kelli and Kerri Moore; and one great nephew, Logan Moore. He was preceded in death by his parents, and special cousin Fred Harris. In accordance with Mr. Harris' wishes, cremation rites have been accorded, and a Graveside Memorial Service will be held at Zion Grove Cemetery on June 1, 2016, at 11:00 a.m., with Rick Allison officiating. Military Rites will be accorded by American Legion, Post #141, of Mt. Vernon. Memorials may be made to St. Jude Children's Research Hospital, or to the Shriners Hospital for Children, and will be accepted at the service, or by mail to the Osborn Funeral Home, P.O. Box 130, Dix, Illinois 62830. Online condolences may be made at www.osbornfuneral.com, or on the funeral home's Facebook page.

Marvin Eugene "Gene" Harris, 75, of Mt. Vernon, passed away peacefully on May 24, 2016, at Nature Trail Health Care Center, in Mt. Vernon. He was born October 7, 1940, in Naylor, Missouri, the son of Elmer and Agnes (Johnson) Harris. On May... View Obituary & Service Information

The family of Marvin "Gene" Harris created this Life Tributes page to make it easy to share your memories.

Send flowers to the Harris family.