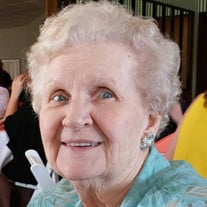 Mary Ann Edwards, 87, of Mt. Vernon, passed away December 17, 2016, at her home. She was born March 12, 1929, in Chicago, Illinois, the daughter of Joseph and Mary (Kocik) Straka. On December 20, 1947, in Chicago, she married Clarence Ray Edwards, and he preceded her in death on January 30, 2006. She is survived by four daughters, Susan Edwards of Naperville, Gayle Skibinski and husband Randy of Centralia, Donna Overstreet and husband Clark of Mt. Vernon, and Sandy Hooker and husband Dave of Elburn; four grandchildren, Michael Smith of Ft. Myers, Florida, Kelly Crosby and husband Sam of Marion, Ohio, Stacey Jolliff and husband Brock of Centralia, and Colin Overstreet of Mt. Vernon; and four great grandchildren, Emily Smith, Gavin Jolliff, and Brayden and Calan Crosby. She was preceded in death by her parents; her husband; one daughter, Elaine Edwards Smith; and two brothers, John and George Straka. In accordance with her wishes, cremation rites have been accorded and no public services will be held. Online condolences may be made at www.osbornfuneral.com, or on the Facebook page of Osborn Funeral Home in Dix.

The family of Mary Ann Edwards created this Life Tributes page to make it easy to share your memories.

Send flowers to the Edwards family.