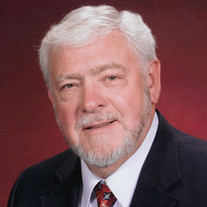 Mervyn Lynn Braddock, 71, of Walnut Hill, died November 20, 2016, at his home. He was born March 2, 1945, in Mt. Vernon, Illinois, the son of Harmon and Thelma (Green) Braddock. On July 27, 1963, he married June Musgrave, and she survives in Walnut Hill. He became a Christian in the Fall of 1963, at Sims Missionary Baptist Church, and was Baptized on July 9, 1972. He was a member of Walnut Hill Baptist Church for many years before becoming a member of Pleasant Hill Baptist Church on May 16, 1999. He worked for Illinois Central Gulf Railroad for thirty years, prior to his retirement in 2005. He enjoyed hunting and gardening. In addition to his wife, June Braddock of Walnut Hill, he is survived by one son, Harry Braddock and wife Angie of Patoka, Illinois; one daughter, Cindy McCleary and husband Jimmy Joe of Fairfield, Illinois; three grandchildren, Casey Bolin and husband T.J. of Patoka, Bradley Braddock of Patoka, and Katie McCleary of Fairfield; one great grandchild on the way; and two brothers, Kermit Braddock and wife Margie of Johnsonville, and Dee Braddock and wife Patsy of Orchardville. Funeral services for Mr. Braddock will be held at 1:00 p.m. Wednesday, November 23, 2016, at the Chapel of Thomason Cemetery, in Wayne City, with Pastor Doug Meyer and Rev. Richard McCormick officiating. A Visitation will be held Tuesday, November 22, 2016, from 5:00 p.m. to 7:00 p.m., at the Osborn Funeral Home in Dix. Memorial gifts may be made to the Illinois FFA, and will be accepted at the service, or by mail to the Osborn Funeral Home, 322 North Main Street, P.O. Box 130, Dix, Illinois 62830. Online condolences may be made at www.osbornfuneral.com, or on the funeral home's Facebook page.

The family of Mervyn Lynn Braddock created this Life Tributes page to make it easy to share your memories.

Send flowers to the Braddock family.