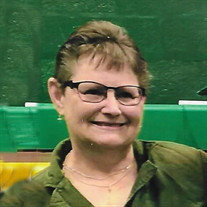 Neta Faye (Bigley) Stuber, 63, of Mt. Vernon, passed away at 12:25 a.m., Tuesday, September 14, 2021, at SSM Health St. Mary's Hospital in Richmond Heights, Missouri. She was born in Mt. Vernon on August 27, 1958, the daughter of Thomas Earl and Ira Mae (Ellis) Bigley. On October 3, 1980, in Mt. Vernon, she married Curtis Stuber, and he survives. Mrs. Stuber lived in Mt. Vernon, for most of her life, and worked as a bookkeeper for many years, at several different places. She then worked at North American Lighting in Audit on light production for a few years, and most recently worked as a cook at Sharon's Cafe in Salem. Along with her husband, Neta/Nonna/Nannie's grandkids were the light of her life. She enjoyed reading books, hot air balloons, putting together puzzles, and most importantly, spending time with her family. She never met a stranger and would talk to anyone. She will be missed by all her family and friends. In addition to her beloved husband of 40 years, Curtis Stuber of Mt. Vernon, Neta is survived by three children, Travis Adcock, Amy (Stuber) Ray and husband Jason, and Mary (Stuber) Strain and husband J.T.; grandchildren, Dalton, Hailey, Adrianne, Trenton, Tommie and Jenzie; step-grandchildren, Sarah Harris and husband Dominic, and Tyler Travelstead; three step-great-granddaughters, Do'Marah, Ayla and My'Lah Harris; four brothers, Billy and wife Judy of Joliet, Steve and wife Janet of Mt. Vernon, Stan and wife Charlene of Mt. Vernon, and Mike of Mt. Vernon; four sisters-in-law; two brothers-in-law; and several nieces and nephews. She was preceded in death by her parents, Thomas Earl and Ira Mae Bigley; granddaughter Ariel Adcock; four brothers, Ronnie, Kenny, Ricky, and Rodney; and mother-and-father-in-law Carl and Alice (Foster) Stuber. Graveside Funeral Services for Mrs. Stuber will be held at 2:30 p.m. Monday, September 20, 2021, at Bell Cemetery, with Marty Mills officiating. Memorial gifts may be made to Neta's daughter, Amy Ray, to assist with funeral expenses, and will be accepted at the service, or by mail to the Osborn Funeral Home, P.O. Box 130, Dix, Illinois 62830. Online condolences may be made at www.osbornfuneral.com, or on the Osborn Funeral Home Facebook page.

The family of Neta Faye Stuber created this Life Tributes page to make it easy to share your memories.