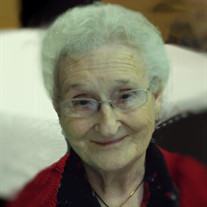 Norma Jean (Vest) Henson, 93, of Cisne, and formerly of Orchardville, passed away at 7:31 a.m., Sunday, April 10, 2022, at Cisne Rehabilitation and Health Care Center. She was born March 23, 1929, in Wayne County, Illinois, the daughter of John Earl and Freda Opal (Cook) Vest. On July 26, 1947, at the home of LaVern's parents, she married LaVern Henson, and he preceded her in death on August 23, 2008. She was a homemaker, whose greatest love in her life was her family. In her last years, she was a resident at Cisne Rehabilitation and Health Care Center, and thought of her caregivers and fellow residents as family. Mrs. Henson is survived by her daughter, Jonna Medder of Cisne; grandchildren, Shannon Henson and wife Nicole of Wayne City, Sherry Jones and husband Scott of Bluford, Cody Burroughs and wife Jennifer of Lexington, South Carolina, Todd Burroughs and wife Caitlin of Kell, and Ryan Medder of Texas; and nine great-grandchildren, Remington Henson, Colt Henson, Emilee Jones, Carleigh Burroughs, Lexa Parsley, Mattox Burroughs, Kaydi Burroughs, Cayley Burroughs, and Wyatt Burroughs. In addition to her husband, LaVern Henson, she was preceded in death by her parents; her son, Rick Henson; a granddaughter, Rachel Parsley; and son-in-law, Tony Medder. Funeral services for Mrs. Henson will be held at 12:00 p.m., Wednesday, April 13, 2022, at Poplar Creek Church, in Orchardville, with Travis Mix officiating. Burial will follow at Jacobs Chapel Cemetery. Visitation will be held Wednesday, from 10:00 a.m. until the hour of service, at the church. Memorial gifts may be made to Norma's family, to purchase an item for Cisne Rehabilitation and Health Care Center in her memory, and will be accepted at the service, or by mail to the Osborn Funeral Home, P.O. Box 130, Dix, Illinois 62830. Online condolences may be made at www.osbornfuneral.com, or on the Osborn Funeral Home Facebook page.

Norma Jean (Vest) Henson, 93, of Cisne, and formerly of Orchardville, passed away at 7:31 a.m., Sunday, April 10, 2022, at Cisne Rehabilitation and Health Care Center. She was born March 23, 1929, in Wayne County, Illinois, the daughter of... View Obituary & Service Information

The family of Norma Jean Henson created this Life Tributes page to make it easy to share your memories.

Norma Jean (Vest) Henson, 93, of Cisne, and formerly of Orchardville,...

Send flowers to the Henson family.