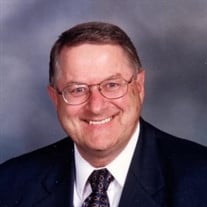 Ralph Owen Swarthout, 82, passed from this life on September 30, 2020 at his home in Lincoln, IL. Ralph was born on November 11, 1937, in Edmore, Michigan, near his home in Vestaburg, to Merton Sylvester and Violet Fern (Lippert) Swarthout. His family was instrumental in starting both Rock Lake Christian Assembly and Great Lakes Bible College, and Ralph attended both as a young man. He then served in the U.S. Army, including time assisting in the chaplain’s office in Verdun, France. After an honorable discharge, he continued his schooling at Lincoln Christian College (now Lincoln Christian University) in Lincoln, IL, where he met Marva L. Cobb. They were married in Alma, IL on July 25, 1964. After graduating from LCC in 1966, Ralph served churches in various ministerial roles, first in Lexington, KY, where they welcomed daughter Lori; then Crawfordsville, IN; Anderson, IN; Fort Wayne, IN; West Frankfort, IL; Macomb, IL; Vandalia, MO; Clinton, IL; and Woodlawn, IL, plus a few interim ministries during retirement. Ralph often said, “I love Jesus, and I love people!” Everyone knew him for his infectious laugh and big heart. He knew he wasn’t perfect, also favoring the saying, “I’m just one beggar trying to help the other beggars find bread,” the Bread of Life. He specialized in coffee cup evangelism and pastoral care throughout his life and was also an avid supporter of missions. Ralph is survived by his wife Marva, daughter Lori and her husband Tracy Thomas, granddaughters Hannah Thomas and Kathryn (Jarod) Haskell, great-grandson Ezra and another great-grandchild on the way. Also surviving are his sister Marjorie Oathout and brother Glenn (Evelyn) Swarthout, cousin Andrew (Marcia) Hansen, and many loving nieces, nephews, cousins, and special friends. He was preceded in death by his parents, brother Bernard Swarthout, sister Carol (Marvin) Thrush, and brother-in-law Cliff Oathout. A family celebration of life will be held at the Alma Christian Church, Alma, IL on Saturday, October 10 at 11:00 a.m., with Andy Hansen and Randy VanAusdall officiating. A graveside service at the cemetery in Alma, IL, open to any who would like to attend, will be held at 1:00 p.m., with Jono Schnautz officiating. Masks and physical distancing will be necessary. In lieu of flowers, the family requests that gifts be made to the Swarthout/Thomas/Haskell Legacy Scholarship established at Lincoln Christian University to benefit earnest (but not necessarily straight-A) students in Ralph’s honor; funds may be sent to LCU, 100 Campus View Dr., Lincoln, IL 62656, or via https://lincolnchristian.edu/giving/give/#give-form (choose Other Designation and type in Swarthout). The family would like to thank Safe Haven Hospice for their excellent care throughout this summer, as well as the staff of Osborn Funeral Home, Dix, IL for their friendship with Ralph, in addition to handling arrangements in coordination with the wonderful staff of Bennett Funeral Home in Lincoln, IL.

Ralph Owen Swarthout, 82, passed from this life on September 30, 2020 at his home in Lincoln, IL. Ralph was born on November 11, 1937, in Edmore, Michigan, near his home in Vestaburg, to Merton Sylvester and Violet Fern (Lippert) Swarthout.... View Obituary & Service Information

The family of Ralph Owen Swarthout created this Life Tributes page to make it easy to share your memories.

Ralph Owen Swarthout, 82, passed from this life on September...

Send flowers to the Swarthout family.