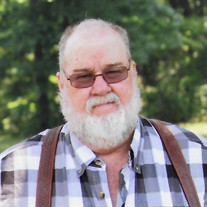 Rickey G. "Rick" Hayes, 65, of Mt. Vernon, passed away at 4:19 a.m. Friday, July 22, 2016, at his home. He was born April 13, 1951, in Mt. Vernon, the son of Rayburn "Ray" and Edna "Louise" (Minor) Hayes. On July 1, 1970, in Mt. Vernon, he married Vera Meadows, in a ceremony officiated by Rev. Olen Weatherford. Vera survives in Mt. Vernon. He attended Field Consolidated Grade School and Mt. Vernon Township High School, and was a veteran of the Army National Guard. He was of the Methodist faith. He worked for Continental Tire for thirty years, until his retirement, and was a member of the Mt. Vernon Gun and Sportsman's Club. He was an avid coon hunter, and enjoyed riding mules. One of his greatest joys were his granddaughters, who he referred to as "his princesses." In addition to his wife, Vera Meadows Hayes, of Mt. Vernon, he is survived by one son, Timothy "Shane" Hayes and wife Angie of Mt. Vernon; one daughter, Nancy Jane Morehead and husband John of Mt. Vernon; six grandchildren, Haylei Massey and friend Jeremy Osborn, Jessie Anne Hayes, Shanna Hayes and fiancée Trey Hall, Jacob Brown and fiancée Sophia Bruce, and Bianca and McKenzie Flahaut; two great grandchildren, Patience Bruce and Jacob Brown, Jr.; two brothers, Tom Hayes and wife Barbara of Mt. Vernon, and Larry Hayes and wife Tish of Mt. Vernon; and two sisters, Frances Staley and husband Ivan of Mt. Vernon, and Pat Staley of Texico; two sisters-in-law, Sharion Johnson and husband Jerry of Woodlawn, and Ida Reeves of Mt. Vernon; and special friends Joe Sanders and Kathy Ellis, and Mike and Sandy Shelton. He was preceded in death by his parents, Ray and Louise Hayes; Mother and Father-in-law, Ethel and John W. Meadows; two brothers-in-law, Bob Staley and John H. Meadows; and three sisters-in-law, Shirley Anderson, Betty Southerd, and Reta Meadows. Funeral Services for Mr. Hayes will be held at 6:00 p.m., on Sunday, July 24, 2016, at Osborn Funeral Home, with Rev. Randy Hayes officiating. In honor of his wishes, cremation rites will be accorded following the service. Visitation will be held Sunday, from 4:00 p.m. until the hour of service, at the funeral home. Memorial gifts may be made to Celtic Hospice, the American Cancer Society, or the Alzheimer's Association, and will be accepted at the service, or by mail to the Osborn Funeral Home, P.O. Box 130, Dix, Illinois 62830. Online condolences may be made at www.osbornfuneral.com, or by visiting the funeral home's Facebook page.

The family of Rickey G. "Rick" Hayes created this Life Tributes page to make it easy to share your memories.

Send flowers to the Hayes family.