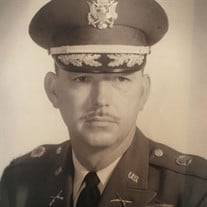 Lt. Col. (R) Robert E. Copeland, 91, who enlisted in the Army as an 18-year-old in l944, served as a guard at the Nuremberg trials in Germany in l946, as an Infantry officer in Korea in 1952, and as an historian in Vietnam in 1966, died in his sleep, Oct. 30, 2017, at an assisted living facility in Copperas Cove, TX. Copeland, who retired from the Army in 1968, was a long-time resident of Harker Heights, Texas, and worked as an agent for the Prudential Insurance Company in Killeen until his retirement in 1988. He was active in the Killeen Rotary Club for many years and was a long-time member of the Killeen Kickers. An avid golfer, Copeland also enjoyed reading, gardening, playing bridge, square dancing, hooking rugs, cooking and fishing. A life-long learner, he also began studying Spanish and learning to play the piano in his late 70's. Copeland was born on May 27, 1926 in Walnut Hill, Illinois. He graduated from Woodlawn Community High School in 1943, volunteered for the draft in 1944, and then fought in the Battle of the Bulge. He served in the 16th Infantry, 1st Infantry Division in the latter part of WWII, where he was assigned as a guard in the cell block where prominent Nazi leaders such as Rudolph Hess and Herman Goering were housed during the Nuremberg trials. He was preceded in death by his wife, Evelyn Joyce Copeland (Copple), and is survived by his four children, Mary Ann Hollomon (William Hollomon) of Columbus, GA, Robert Copeland (Mary Copeland) of Arab, AL, Becky Copeland (Larry Cooper) of Louisville, KY and Mark Copeland of Cyclone, TX. He is also survived by five grandchildren: Mary Carroll Lewis, William Hollomon and Andrew Hollomon of Columbus, GA, Daniel Cooper of Cambridge, MA and Ted Cooper of Portland, OR, as well as four great-grandchildren, Haygan and Garren Hollomon, Zach and Ashley Lewis, all of Columbus, GA. Graveside Committal services for Mr. Copeland will be held at 11:00 a.m. Saturday, April 7, 2018, at Boyd Cemetery, with Chaplain Ernie Collins officiating. Graveside Military Rites will be accorded by American Legion Post #141 of Mt. Vernon. In lieu of flowers, memorials may be made to the National Infantry Museum Foundation, and mailed to 1775 Legacy Way, Columbus, GA 31903, or they will also be accepted at the service and by mail to the Osborn Funeral Home, PO Box 130, Dix, Illinois 62830. Online condolences may be made at www.osbornfuneral.com, or on the funeral home's Facebook page.

The family of Lt. Col. (R) Robert E. Copeland created this Life Tributes page to make it easy to share your memories.

Send flowers to the Copeland family.