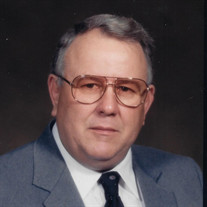 Ronald Wayne Stuber, 79, of Iuka, passed away at 12:32 PM Tuesday, November 6, 2018, at his home. Mr. Stuber was born on January 18, 1939, in Marion County, the son of Clarence E. and Rena (Geibe) Stuber. He married Kathy (Quarterman) Stuber on September 27, 1958, at Romine Presbyterian Church, and she preceded him in death on February 28, 2010. Mr. Stuber is survived by daughters, Gay Walker, and Penny Helm and husband Kenny, all of Iuka; six grandchildren, Jeremy Prosise of Kentucky, Jarid Walker of Salem, Chandra Hunter and husband Roger of Iuka, Shane Prosise of St. Louis, Missouri, and Brandon Stuber and Breanne Speaks of Salem; and three great-grandchildren, Garrett and Maybree Hunter of Iuka, and Jacob Prosise of Kentucky. Also surviving is a brother, Tony Stuber of Kell. In addition to his parents and his wife, he was preceded in death by his son, Jeff Stuber, and a brother, Bob Stuber. In 1957, his senior year, Wayne was voted MVP for the Salem Wildcats football team as a fullback. He worked at Stanford engineering for 18 years, and was a carpenter and worked at C 13 television station, and also worked at the Salem Country Club. He was past president of the Kell Grade School board. He loved to watch his grandchildren play sports throughout their school years. Mr. Stuber was of the Baptist faith. As per his wishes, Mr. Stuber's body will be cremated, and there will be no public visitation or funeral service. Memorials may be made to the Osborn Funeral Home in Dix, who is in charge of arrangements, and may be mailed to P.O. Box 130, Dix, Illinois 62830. Online condolences may be made at www.osbornfuneral.com, or on the funeral home's Facebook page.

The family of Ronald Wayne Stuber created this Life Tributes page to make it easy to share your memories.